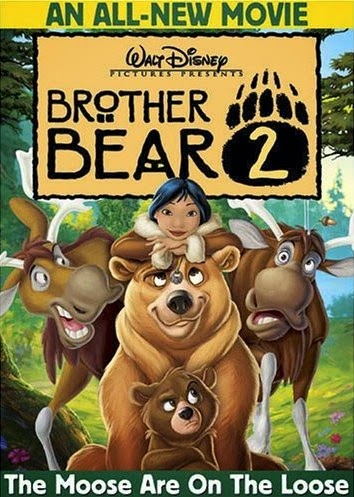 ANIMATION/FANTASY/ROMANCE/COMEDY with elements of adventure

After waking from a long hibernation, the brother bears, Kenai (Patrick Dempsey) and Koda (Jeremy Suarez), are ready for a trip to Crowberry Ridge, the location of the best spring berries.  However, a former human friend of Kenai’s, Nita (Mandy Moore) interrupts their journey to ask for Kenai’s help.  Kenai was once human, and when he was just a boy, he and Nita made a childish promise of eternal love.

Their tribe’s Great Spirits heard them, and now that the adult Nita plans on marrying her betrothed, Atka (Jeff Bennett), a man from a prominent tribal family, the spirits apparently aren’t willing to let the marriage happen.  The village shaman, Innoko (Wanda Sykes), informs Nita that she must break her pact of devotion to Kenai before she can marry Atka.  That pact is signified by an amulet that Nita wears around her neck.  Nita and Kenai must burn the amulet together to severe the relationship.

Kenai reluctantly agrees to help Nita, and they begin the dangerous journey to Hokani Falls, the place where they made their pact.  However, as they conquer one challenge after another on the journey, the friends find their old relationship rekindled, and the bond they once made only deepens.  Meanwhile, Koda is afraid he’ll loose his brother, although he sees that Kenai deeply loves Nita, but Koda’s decisions to set things right could endanger them all.  The moose brothers, Rutt (Rick Moranis) and Tuke (Dave Thomas), among others, provide comic relief.

Brother Bear 2 (also called "BB2" in this review), the straight-to-video (direct-to-DVD) sequel to Disney’s 2003 Oscar-nominated, animated feature film, Brother Bear, has such high quality animation that BB2 could be mistaken for a traditionally-animated (hand drawn) movie released to theatres.  The story is good, but the script doesn’t sing out that its feature film material.  Still, the screenplay hits the high notes that are necessary for any Disney animal fable to be successful – those messages about family, courage, honor, sacrifice, and loyalty.  Melissa Etheridge also sings three songs, two of which she composed, and they’re in synch with the film’s tone.

Patrick Dempsey (now best known as Dr. Derek Shepherd or “Dr. McDreamy” of the hit ABC TV drama, “Grey’s Anatomy”) replaces Joaquin Phoenix as the voice of Kenai for BB2, and he’s pretty good.  It helps that Jeremy Suarez reprises his voice performance as the wisecracking bear cub, Koda, and he’s great – heads and shoulders above everyone else.  The beautiful animation work done on Koda manages to capture the energy and quality of Suarez’s performance.

Some of Disney’s earlier video sequels to their classic animated features had animation that was, at best, the quality of a good TV cartoon.  While not the work of Walt Disney Feature Animation, Brother Bear 2 is the best work from DisneyToon Studios, the group responsible for prior straight-to-video flicks.  DisneyToon was recently shut down, and this is a shame because the animators and artists there were just hitting their stride.


Posted by Leroy Douresseaux at 9:38 AM