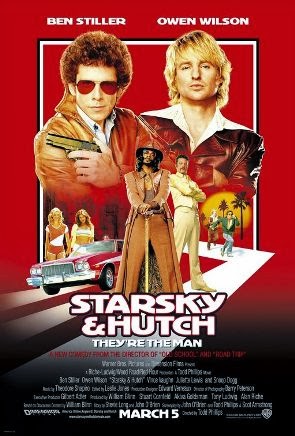 COMEDY/CRIME with some elements of action

With my refined tastes, I should technically be repulsed by film remakes of 70’s television programs, but repulsed or otherwise, I’ll generally see them.  Still, I’d planned on seeing the controversial Mel Gibson Jesus movie, but it was sold out, and there was the poster for Starsky & Hutch staring me in the face.  Though I had to settle on something I hadn’t planned on seeing at the time, it didn’t really affect my enjoyment of Starsky and Hutch.  It’s a fairly funny film, but you wouldn’t have missed a cinematic event that must be seen on the big screen if you’d waited for home video or TV.

Set in a sort of anachronistic version of the 1970’s, S&H is the story of two streetwise detectives who form an unlikely partnership.  David Starsky (Ben Stiller) is an anal by-the-books guy, who actually does nothing but screw up, despite his attention to rules.  Ken “Hutch” Hutchinson (Owen Wilson) is a genial kind of guy, always hanging loose, but he is also the kind of cop who breaks the law when it suits him.  Hutch robs bookies for their loot, and he uses illegal drugs.  The mismatched pair gets on the nerves of their boss, Captain Dobey (Fred Williamson), relies on tips from an omniscient street informer, Huggy Bear (Snoop Dogg), and busts crime in Starksy’s 1974 red-and-white, souped-up Ford Torino.  Their first big case together involves a respectable businessman, Reese Feldman (Vince Vaughn), who may be a big time cocaine dealer.  However, Starsky and Hutch’s bumbling and lack of hard evidence dog their case every step of the way.

Starsky & Hutch has some extremely hilarious moments, not as many as, say, Scary Movie 3.  S&H is structured like SM3 in that S&H’s plot, story, and script are basically an elaborate, but dumb, blueprint to layout jokes.  S&H’s script is, however, nothing like the disaster of that was SM3’s script.  S&H also reminds me of another of director Todd Phillip’s hits, Old School (2003): lots of funny scenes, but ultimately a lame, by-the-book, Hollywood yuck fest that plays it way too safe.

This is also one of the times that Ben Stiller’s shtick, that of the angry, quick-tempered nerd, works for the film.  Owen Wilson is a great screen presence; the camera loves him, and the role of the amiable Hutch easily fits Owen’s usually warm and generous film persona.

I generally enjoyed this film’s deep tongue in the tongue-in-cheek mode.  Starsky and Hutch is not to be taken seriously, nor does the film try to make you do so.  The quasi-70’s setting is a hoot, at least early on, but the film’s period atmosphere eventually dissolves into mere background noise.  There should have been much more Snoop Dogg because he surprisingly has good screen presence.  Also, Will Ferrell’s (who doesn’t get a screen credit) riotous turn as Big Earl, a man in the county lockup with serious man crush issues, is certainly a reason to see this film, at home or in a theatre.