Review: "After Earth" Offers a World of Thrilling Adventure 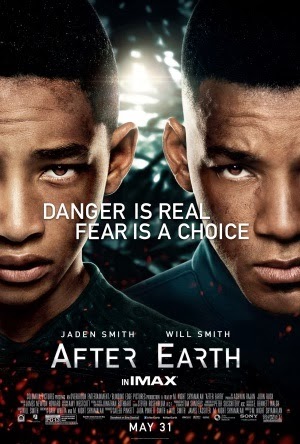 It was panned by critics, and it was a box office disappointment – some would even say a box office bomb.  However, I liked it.  I liked it a lot more than I thought I would.  It is about as good as I had hoped it would be when I first heard about it.

I am talking about After Earth, the 2013 futuristic science fiction adventure-survival film from director M. Night Shyamalan.  The film follows a teen boy who must embark on a perilous journey across a hostile future Earth in order to save himself and his father.

After Earth takes place 1,000 years after the human race had to abandon Earth because of an environmental cataclysm.  Humanity eventually settles on a new world called Nova Prime.  That settlement brings humanity into conflict with the S’krell, an alien race that wants to conquer Nova Prime.  The S’krell’s secret weapon are the Ursa, large, blind, predatory creatures that hunts humanity by “smelling” human fear.  Humanity is saved by The Ranger Corps, in particular, the legendary General Cypher Raige (Will Smith), who developed the technique that allows humans to successfully fight the Ursa.

The heroic Cypher, however, does not have a successful relationship with his son, Kitai Raige (Jaden Smith).  They plan a trip together, but an unexpected event strands them on Earth, a now-quarantined planet.  With Cypher gravely wounded, Kitai must locate a distress signal beacon, but to do that, he must travel cross terrain in which many plants, animals, and the climate are lethal to humans.

There are moments in After Earth, when Will and Jaden’s acting is suspect, but for the most part, they make their respective characters’ bonds and conflicts seem genuine.  As Kitai, Jaden’s fear is palatable, and his anger, grief, and disappointed are authentic within the context of his story.  I think some critics’ complaints of nepotism regarding this father-son acting team, specifically as it relates to After Earth, are dishonest.  Fathers and sons have been appearing together in film for decades.  What makes the Smiths so different that they are the target of such derision and resentment?

I also think that the way some critics are always out to attack director M. Night Shyamalan has gotten out of hand.  He does an excellent job with After Earth, especially with a young actor like Jaden.  Shyamalan creates a taut, riveting journey that begins generating a sense of impending doom from the time the Raiges leave Nova Prime to the final frames of the film.  Whatever people might say about him, Shyamalan is the master of the gripping narrative, and he does some gripping with After Earth.

Worthy of note are two excellent supporting performances by Sophie Okonedo and Zoe Isabella Kravitz, especially the latter.  Zoe is award-nomination worthy in her After Earth part, and it is a shame she does not appear in more films.

Visually, After Earth is a beautiful film, and its science fiction and futuristic concepts (such as the dialect spoken in the film) are inventive and interesting.  James Newton Howard’s score is soaring and emotional; the perfect music for a film that is both an epic adventure and a tale of a ragged relationship between an estranged father and his son.

Bravo!  I understand that After Earth is the first of a planned trilogy.  If the second and third movies could be as good as the first, I hope that they are produced, despite this film’s box office results.  Regardless of hyped box office expectations and of the politics of film critics and their resentments and prejudices, After Earth is a movie spectacular.  This is a classic tale of man vs. nature, of man vs. himself, and of man vs. his dad who has way-high expectations.  After Earth will stand the test of time.


Posted by Leroy Douresseaux at 9:40 AM