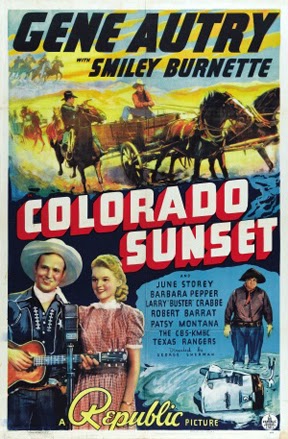 The subject of this movie review is Colorado Sunset, a 1939 Western film starring Gene Autry.  Autry sings five of the eight songs performed in the film, and is credited with co-writing one of them (“Poor Little Dogie”).  Colorado Sunset finds Gene and his buddies buying a ranch that turns out to be a dairy farm and then having to fight a protection racket that prevents dairy products from safely reaching the market.

After his well-meaning sidekick, Frog Millhouse (Smiley Burnette), buys a cow farm instead of a cattle ranch, singing cowboy Gene Autry and his ranch hands gradually embrace the dairy business in the film, Colorado Sunset.  That is when the musical cowpoke runs into a corrupt dairy association, led by the powerful local veterinarian, Dr. Rodney Blair (Robert Barrat), who is bent on dominating the local dairy industry.

However, it seems the Hall Trucking Company is taking the blame for bandit attacks on dairy farmers trying to move their milk to market.  Determined to put an end to this intimidation, Gene runs for Sheriff of Barton County against corrupt Deputy Dave Haines (Buster Crabbe).  Country music icon Patsy Montana sings “I Want to Be a Cowboy’s Sweetheart,” and radio crooners, the CBS-KMBC Texas Rangers perform with Autry.

Even viewers only a little familiar with B-movie westerns will recognize that Colorado Sunset seems to have a bit more flash than the average B-movie western.  As Autry’s film were profitable, film studio Republic Pictures was willing to spend extra money on Colorado Sunset’s production which explains the action-filled sequences and the elaborate final wagon chase and shootout – an upgrade from what was usually found in B-movie westerns.  Some might find the anachronistic mixture of automobiles and radio stations with characters who seemed to be living in a 19th century western town ludicrous, but it’s actually charming.  With Autry and his cast mates singing, Smiley Burnette providing comic relief, and the good guys fighting the bad guys, Colorado Sunset is old-timey fun.


Posted by Leroy Douresseaux at 9:21 AM