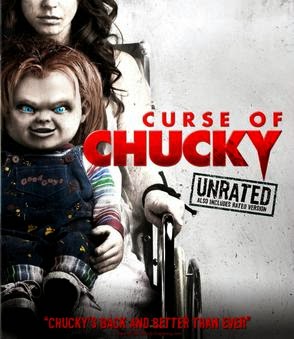 Curse of Chucky is a 2013 straight-to-video horror film from writer-director, Don Mancini.  It is the sixth movie in the Child’s Play film franchise, and the first released since 2004’s Seed of Chucky.  The film follows a young woman who suspects that a mysterious talking, red-haired doll may be the key to recent bloodshed in her home.

As Curse of Chucky begins, Nica (Fiona Dourif) signs for a mysterious package sent to her mother, Sarah Pierce (Chantal Quesnelle).  After her mother’s gruesome suicide, Nica is forced to deal with her estranged sister, Barb (Danielle Bisutti), when she visits with her husband, Ian (Brennan Elliott), nanny, Jill (Maitland McConnell), and young daughter, Alice (Summer Howell).  There is clearly tension among the adults, so Alice comforts herself with a grinning, red-haired talking doll named Chucky (voice of Brad Dourif).  After a series of strange occurrences, Nica begins to suspect that Chucky has something to do with it, especially after the killing begins...

Unlike previous “Chucky” movies, Bride of Chucky (1998) and the previously-mentioned Seed of Chucky, Curse of Chucky is not comic horror.  There is some humor, but this is essentially a slasher film.  Like many slasher films, Curse of Chucky has elements of a mystery film, with at least one character trying to figure out, “What is going on?”  Of course, we know, as the audience, that Chucky is the instigator/murderer, but there is some fun in watching the character-victims be clueless on their way to gruesome deaths.  Horror fiction sometimes offers characters that are so self-absorbed or are so focused on the melodramas in their social circles that they do not see the killer in their midst.  In this movie, the characters illicit sympathy because their problems, conflicts, and obstacles make sense – even when their difficulties are funny.

It is quite a ways into Curse of Chucky before the filmmakers let Chucky go wild, so this movie is one of those scary movies that actually gets better as it gets closer to the end.  In fact, the film has an excellent ending, and what amounts to two epilogues – two killer epilogues.  So, dear viewer, you have to watch past the credits.

As usual, Brad Dourif does stellar work as Chucky’s voice, although, this time around, he sounds a little like Danny DeVito.  Having his daughter, actress Fiona Dourif, in this film is another good choice, especially as Curse of Chucky’s story has surprising ties to the original film and some of the sequels.  Fiona is intense, and she has just enough of a crazy vibe to give the film the edgy heroine it needs in order for the story to work.

Fans of the Child’s Play movies will like Curse of Chucky, and some, like me, will like it a lot.  As a direct-to-DVD movie, Curse of Chucky could have cursed the franchise.  Instead, this entertaining horror film reminds fans of why having Chucky back is a good and necessary thing.


Posted by Leroy Douresseaux at 8:33 AM