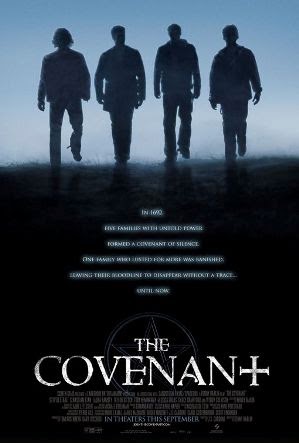 The subject of this movie review is The Covenant, a 2006 supernatural horror and action-fantasy film from director Renny Harlin.  The film follows four young men who belong to a supernatural legacy and are forced to battle a fifth power long thought to have died out.  The young men must also contend with is their jealousy and suspicion of one another, which threatens to tear their union apart.

In 1692, four families of the Ipswich Colony of Massachusetts formed a covenant of silence to hide that they wielded The Power – what their fellow colonists identified as witchcraft.  Cut to the present: Caleb Danvers (Steven Strait), Pogue Parry (Taylor Kitsch), Reid Garwin (Toby Hemingway), and Tyler Sims (Chace Crawford) are the Sons of Ipswich, the heirs to the bloodline of those four families.  They are bound by their sacred ancestry, and Caleb, as the oldest, is their de facto leader.  As minors, they possess only a fraction of The Power they will have as adults, but Caleb is just a few days from his 18th birthday when he will “ascend” and receive his full powers.

Caleb and the other sons are students at the elite Spencer Academy.  There are two new students.  The attractive blond, Sarah Wenham (Laura Ramsey), catches Caleb’s eye.  The raffish Chace Collins (Sebastian Stan) becomes a rival for the affections of Pogue’s girlfriend, Kate Tunney (Jessica Lucas).  High school puppy love and rivalries are put on hold when the body of a dead student is found in the local woods after an outdoor party (rave?).  Caleb and Pogue sense that one of their own is abusing his power, threatening to break the covenant of silence that has protected their families for hundreds of years.  And this mystery user is very powerful and also hunting Caleb and Sarah.

The Covenant is kind of like the 1987 film, The Lost Boys, jammed into The WB’s (now The CW’s) TV series, “One Tree Hill.”  Director Renny Harlin (A Nightmare on Elm Street 4: The Dream Master, Exorcist: The Beginning) is no stranger to cheesy horror flicks that have a few scary moments, and The Covenant is a cheesy horror flick with some genuine atmosphere, a few scary movie thrills, and an obnoxiously loud soundtrack and score.  The main problem with The Covenant is that it’s all surface – lots of pretty visuals.  In fact, Harlin focuses so much on how the film looks – with its bevy of sexy male leads and haunting Québec, Canada filming locations – that he never gets into the meat of the story.

I will grant that co-producer/writer J.S. Cardone’s script is top heavy with backstory, pre-history, and mythology, so Harlin has a lot of text and subtext to transform into a movie that holds the short attention spans of its intended audience.  (This probably would work better as a novel, or hey, even a television series on The CW.).  There is so much intriguing stuff left in the air, and Harlin only brushes on the characters enough to give the audience a nebulous idea about what’s going on.  Still, The Covenant is a faintly entertaining, half-assed popcorn flick.  It’s the kind of horror movie that will live a half-life in the limbo of video rentals – lucky to be an afterthought behind the good horror movies.

Posted by Leroy Douresseaux at 6:18 AM