Review: "Boogeyman" Didn't Have to Be a Disappointment (Happy B'day, Sam Raimi) 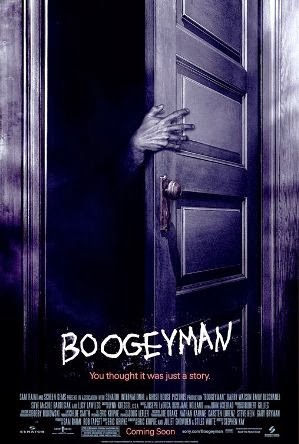 The subject of this movie review is Boogeyman, a 2005 horror film from director Stephen T. Kay.  A take on the classic fear of a “monster in the closet,” this film focuses on a young man who is still haunted by a childhood terror that has affected his life.

Boogeyman was co-produced by Sam Raimi (director of The Evil Dead and three Spider-Man films), and also yielded two direct-to-DVD sequels. Actor Barry Watson, who was one of the stars of the long-running television series, “7th Heaven,” plays the lead character in Boogeyman.

A young man named Tim Jensen (Barry Watson) is traumatized by events he believes happened in his childhood bedroom.  His memories tell him that as an eight-year old boy he saw the boogeyman (Andrew Glover) come out of his closet and steal his father (Charles Mesure) away from him.  Now years later, after his mother’s (Lucy Lawless) funeral, he returns to his family home to face his fears that may be either a monstrous entity stealing away those he loves or the figment of his sick mind.

Boogeyman is lightweight entertainment, but sometimes it’s a gooseflesh raising, edge-of-your-seat, horror movie, even the cheesy bits, of which there are many.  Quick cuts from one shot to another, bumps in the night, slamming doors, knocking from behind locked doors, closets, and walls, lots of night scenes, and day scenes that look like night scenes are on the menu for this film.  There is even a shot of the footsteps of an unknown person who may be the (gasp) boogeyman, but still horror movie buffs, even the most difficult to please, will find a few moments of genuine fears and thrills.

However, Boogeyman tries to be mystery story about a child abductor, a psychological horror film, a monster movie, a family melodrama, etc.  It finally adds up to a scary movie that abruptly runs out of gas after trying on the rags of just about every horror sub-genre.  It’ll leave you asking what happened.  The screenwriters and director are too coy and too cute by a mile, so the result of their creative efforts is a film barely worth a rental.