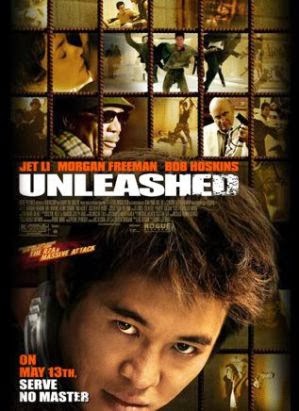 The subject of this movie review is Unleashed, a 2005 martial arts and crime film from writer Luc Besson and director Louis Leterrier.  The film was a French, British, and American co-production and was originally released under the title, Danny the Dog, but released in the United States as Unleashed.  The film centers on a man who has been enslaved by the mob since childhood and trained to act like a human attack dog, but who one day escapes his captors and attempts to start a new life.

On and beneath the mean streets of Glasgow, Bart (Bob Hoskins) destroys those who won’t pay their debts to him.  The fiery gangster has a nearly unbeatable weapon he uses to encourage debtors to pay him what they owe, one he also uses to put would-be rivals in their place.  This secret weapon is Bart’s enforcer, Danny (Jet Li), a martial arts fighter of near supernatural ability.  Danny has been kept a prisoner, for all practical purposes, by his “Uncle Bart” since he was a boy.  “Danny the Dog” wears a collar and lives the simple existence that Bart has crudely and cruelly fashioned for him; Danny can’t even remember his origins.  When Bart pulls his collar off, that’s the signal for Danny to attack, and he will either maim or kill – always as Bart dictates.

However, a chance encounter with a soft-spoken, blind piano tuner, Sam (Morgan Freeman), offers Danny a chance to find out what kindness and compassion are.  When a gangland coup inadvertently frees him, Danny finds his way back to Sam and begins to live with the kindly old soul and his daughter, Victoria (Kerry Condon).  They open their home and hearts to him, but the past comes knocking back into Danny’s life.  Now, he has to fight the mob to protect his new family and keep from returning to his old one.

Luc Besson is the French director of flashy action films such as The Fifth Element, but he has also produced a number of martial arts inflected films, including The Transporter franchise.  He went directly to the Hong Kong source for his Jet Li vehicle, Danny the Dog, known for its American release as Unleashed.  [I do not know if this film was re-edited and shortened by a few minutes, in addition to the name change, for its U.S. release.]  Unleashed is one of the few really good English-language martial arts dramas to hit the screen since Bruce Lee’s films in the early 1970’s.  What makes this film a solid and compelling production in which the drama is equal to the martial arts sequences is having two fine dramatic actors:  Morgan Freeman, who is arguably the best American actor working today, and Bob Hoskins, a superb character actor who is too often an afterthought.

Freeman does his wise old black man routine, but this time with a twist.  Sam is a man of culture with impeccable taste.  He is a man who savors life, and his other senses so deeply drink of life that it is as if he weren’t blind.  Kind yet vigilant, he is the ultimate father figure – protector and encourager.  Hoskins gives his Bart many flavors.  On one hand, he plays the gangster as a petty and petulant hood looking for his share; on the other hand, he is all too human in his cruelty.  There isn’t a whiff of the supernatural or paranormal about what Bart does; he is just a bad man.

Jet Li is the star, and even Jet fans like myself must face up to the fact that Li isn’t a great actor when he has to speak English.  He is, however, a great performer regardless of the language he speaks.  Those all-around, all-star abilities that a movie star must have – a blend of the physical, the mental, and the spiritual – he has.  Li lights up the screen every time he’s on, and he always draws attention to himself, no matter how many good actors may be on screen with him.  A human dynamo, Jet Li is truly a martial artist and a film artist.

Unleashed is quite good, but falters in the end – letting the drama whither on the vine so that Li and his adversaries can have their big, final confrontation, and what a confrontation it is.  The film plays at being an epic, but Besson’s script can’t be bothered with developing conflicts and motivations; we’re here to see Li fight and the script focuses on giving us that.  Watching that final battle makes me wonder when Li is going to get his “Crouching Tiger,” but in the meantime, we can enjoy Li’s best English language effort… yet.