Review: "The Devil's Rejects" a Different Kind of Crime Flick 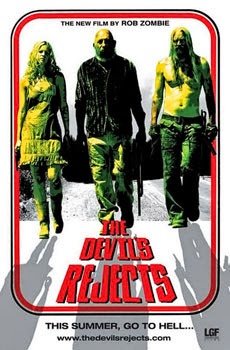 The subject of this movie review is The Devil’s Rejects, a 2005 horror thriller and crime film from director Rob Zombie.  The film is a sequel to Zombie’s 2003 film, House of 1000 Corpses.  In the new film, the villains of the first movie are now seen as anti-hero types on the run from the law.

The Firefly Family or, as they call themselves, The Devil’s Rejects, a band of sadistic killers, wake up one morning to find their isolated farm hideout ambushed by the vengeful Sheriff John Quincy Wydell (William Forsythe) and a posse of his deputies.  With guns blazing, only Otis B. Driftwood (Bill Moseley) and his sister Baby Firefly (Sheri Moon Zombie) escape the barrage of bullets unharmed.

The duo hide out in an isolated desert motel waiting to be joined by another murderous relative, the killer clown, Captain Spaulding (Sid Haig), killing whoever stands in their way or angers them.  However, as the body count soars, Sheriff Wydell, seeking revenge for the Rejects’ murder of his brother, George Wydell (Tom Towles), decides to take matters into his own hands and begins a private and violent war against The Devil’s Rejects outside the jurisdiction of the law.

The Devil’s Rejects is Rob Zombie’s sequel to his controversial 2003 indie hit, House of 1000 Corpses.  Rejects is structurally better in terms of narrative flow and writing, and Zombie sprinkles his cast with a collection of character actors known either for their roles in violent action movies or for their cult status in TV and film.  Among them include Priscilla Barnes, who is best remembered as “Terri Allen,” the third and final blonde roommate on the popular late 70’s/early 80’s television sitcom, “Three’s Company,”  and Ken Foree, who was “Peter,” one of the four human survivors trapped in a shopping mall in the original 1978 Dawn of the Dead.

In fact, Zombie designed his film to look like one of those violent crime thrillers that were synonymous with 70’s cinema.  Even going back to the first film, this franchise was as much Deliverance as it was The Texas Chainsaw Massacre.  The film’s opening sequence, a bullet-laden shootout, is as good as any Hong Kong crime film and is as intense as the big shootout in Michael Mann’s Heat – though much shorter.  Zombie’s film is silly, sadistic, and unabashedly subversive.  While the film and its characters’ antics (both the “hero” and the “villains are brutal and vicious assholes) get old after awhile, Zombie doesn’t commit the same flawed, artistic pretensions he did in House of 1000 Corpses.

His film is gloriously and rebelliously a bloody, gore-laden, crime film about bad-asses headed for a showdown.  There are a few scenes and sequences in this film that true film fans cannot and must not miss.  Those who can take the buckets of blood, F-bombs (several hundred), and atrocious murders will find The Devil Rejects a welcomed respite from the highly-polished polished movies that currently pass for Hollywood’s version what a gritty crime flick is.