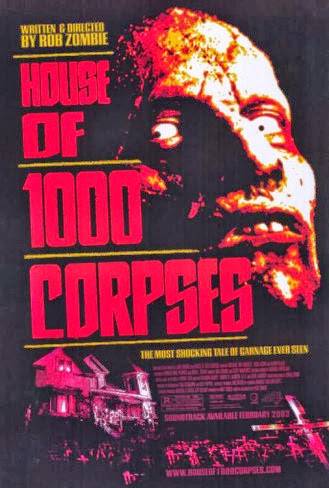 The subject of this movie review is House of 1000 Corpses, a 2003 horror and exploitation film from musician, recording artist, and director, Rob Zombie.  The film takes place on Halloween and follows four people (two couples) held hostage by a sadistic backwoods family.

I’m only vaguely familiar with Rob Zombie’s music, as a solo artist or as the front man for the band White Zombie, but what I’ve heard, I’ve like very much.  I first ignored news that he was making a movie, especially when I learned that the title would be House of 1000 Corpses.  However, I became more interested as I followed the controversy surrounding the film, including original distributor, Universal’s, decision not to release the film because they believed it would receive an NC-17 rating from the MPAA.  Since being finished in 2000, Zombie searched for a distributor until Lion’s Gate decided to distribute the film.

The tale of this horror movie is a familiar one to fans of scary movies, in particular, The Texas Chainsaw Massacre.  This time, two couples get lost in a remote rural area during a terrible rainstorm.  Seeking refuge and a telephone, the end up in a rundown farmhouse with a family of hugely strange and unusual people.

I could use a lot of words to describe this film: evil, wicked, disgusting, gory, horrible, horrifying, funny, hilarious, terrifying, spooky, creepy, weird, vain, surreal, strange, bizarre, or maybe I could just say whether it is good or bad.  Well, it’s not a bad film, but I wouldn’t exactly call it good.

It’s as much a music video as it is a movie, not only in its sensibilities, but also in its execution.  Zombie mixes the story with video clips that have nothing to do with the film, while some of them are either vaguely or obviously related to the film either literally and thematically.  Zombie creates a virtual sound wall of violent, bloody, gory, and deranged imagery.  The film is awash in horror, violence, and acts of pure inhumanity.  Despite all that, Zombie manages to create a coherent story.  Even while cramming in as much shock value as he does, he holds onto his central concept of victims and victimizers, giving us just enough about the characters to keep us interested in or curious about them.  Light though he may be on characterization, Zombie seemed to at least have one idea about who and what each character should be.  I know that I really liked the heroes/victims and wanted to know more about them, and the villains are so sick and deranged that I wanted to know from where do things like them come.

The performances are inspired and zany, especially Karen Black, Sheri Moon, and Chad Bannon.  Everybody seemed to be having a lot of fun.  For all the sickness that is this film, I have to give credit for the filmmakers’ creative energy and obvious love for this project.  You could see it in the performances and feel it in the craftsmanship.  Heck, love for this project dripped off the screen the way gore dripped off the walls in the film.

This is by no means for everyone.  I think the film’s biggest weakness is that the violence and sadism are far too sick.  The setting’s relentless environment of blood, violence, and the bizarre hamper the storytelling, but structurally the film is sound.  This is a curiosity piece.  It’s not very everyone; honestly, it’s not for very many people.  It’s a vanity project that might interest fans of Zombie’s music and hardcore horror movie fans who love gore by the shipload.  You have to have a strong stomach and be able to tolerate really extreme subject matter; it’s not for the average Joe or even for many “serious” film fans.  When you walk out the theatre, you need to be able to just brush off this particular movie experience.  It’s not good or bad; it just is.

The story is only supposed to make sense visually the way a music video might “make sense.”  This is Zombie vomiting out some of the twisted imagery that rides in his head.  If he gets to make another horror movie, the next one might delve a little deeper into story and character and leave the shocking and extraneous video images for one of those short films musicians use to sell their music.