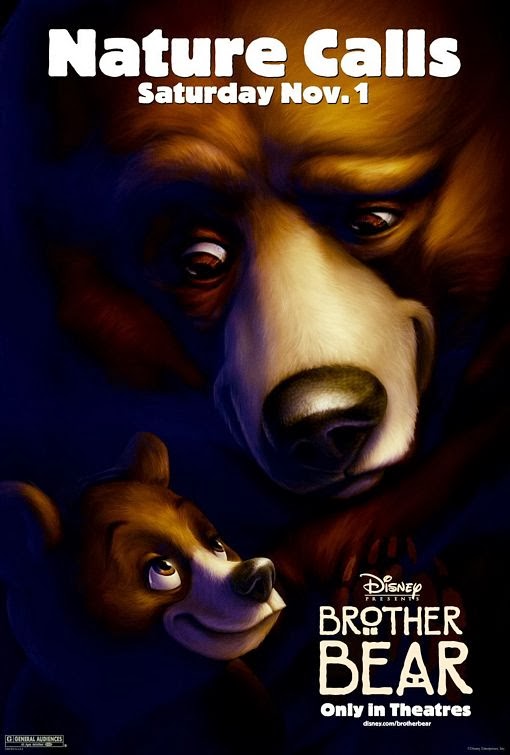 ANIMATION/FAMILY/FANTASY with elements of adventure

The subject of this movie review is Brother Bear, a 2003 animated drama and fantasy-adventure film produced by Walt Disney Feature Animation and released by Walt Disney Pictures.  This Oscar-nominated film tells the story of a young Inuit hunter who needlessly kills a bear, and is magically changed into a bear himself as punishment and forced to play big brother to a talkative cub.

As it stands in late 2003, Brother Bear is the next to last 2D animated (or hand animated) feature from Walt Disney Studios, as they announced their plans to focus on 3D or computer generated films like Finding Nemo and Dinosaur.  With next year’s Home on the Range already looking kinda tepid, the greatest studio of 2D animated films seems to be limping out the exit.

Brother Bear, apparently set sometime in Ice Age North America, is the story of Kenai (Joaquin Phoenix), a young Native American hunter, who seeks vengeance on a bear that caused the death of his older brother Sitka (D.B. Sweeney).  Deep down, Kenai blames himself for his brother’s death, and he hopes killing the bear will help to alleviate his guilt.  After he kills the bear, Kenai causes some kind of unbalance in the supernatural forces that guard the earth.  Sitka’s spirit transforms Kenai into a bear who needs the help of a young cub, Koda (Jeremy Suarez), for redemption.  Meanwhile, Kenai’s other brother, Denahi (Jason Raize), hunts the transformed Kenai, believing him to be the bear that killed both his brothers.

As usual for Disney feature length animation, Brother Bear has beautiful animation dressed up in a sumptuous feast of dazzling colors.  At times, the viewer might think he’s taking a virtual tour of a museum full of lavishly painted landscapes.  BB’s animation isn’t as good as the great ones like Pinocchio and Fantasia, but it is better than Little Mermaid or Oliver and Company.  BB’s character animators do some excellent work, especially on the human characters and the moose voiced by Rick Moranis and Dave Thomas, who are virtually reprising their “SCTV” characters Bob and Doug McKenzie.

BB has two major weaknesses – Phil Collins’ song score and the script.  Collins’ work, while by know means bad, ranges from tiresome to tolerably functional.  The script manages to capture the essence of a very nice fable.  The mixture of Native American spiritualism, pacifism, and interspecies friendship, however, feels strained and, at times, phony.  The animals live together in happiness as if the forest was a nice suburban, multicultural neighborhood, and there’s barely a hint that some of these creatures dine on the other creatures.  The Indian spiritualism and ancestor worship is, in a strangely subtle way, actually over the top.

The film direction ranges from mediocre to fairly good.  Brother Bear strains and struggles to feel like an epic film, but most of the time it falls on its face like a goofy and gangly bear cub.  The cornball humor doesn’t help matters and isn’t all that funny; even Moranis and Thomas are, at best, mildly amusing.  On some levels, the film succeeds in being feel good.  It captures the sense of what it means to be obligated to another being and to be responsible for what happens when one’s actions create havoc in another’s life.  In the end, Brother Bear is nice, but overreaches itself to end up a bit syrupy, not at all grand, classic and heroic like the two films it obviously mimics – Bambi and The Lion King.


Posted by Leroy Douresseaux at 9:50 AM