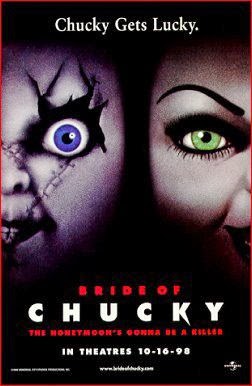 The subject of this movie review is Bride of Chucky, a 1998 horror-comedy from director Ronny Yu.  This was the fourth movie in the Child’s Play film franchise, and the first released since 1991’s Child’s Play 3.  With Bride of Chucky, the franchise changed in tone, emphasizing black comedy and parody (of itself and other films).  The franchise also started to use the name “Chucky” in the film titles, instead of Child’s Play.

Chucky, the doll possessed by a serial killer, discovers the perfect mate to kill and revive into the body of another doll.  The fourth film in the Child’s Play series, Bride of Chucky, takes the inherent humor of the series and moves it up about three notches.  So how does Chucky (voice of Brad Dourif), the murderous doll, come back from the dead for a sequel after being killed again and again?

Chucky, of course, was once a human and the mass murderer, Charles Lee Ray, who used some kind of magic (voodoo) spell to transfer his spirit from his mortally wounded body into that of a “Chucky” doll.  Ray’s plan was to transfer his spirit into another body, but that failed over the course of three Child’s Play movies.  Now, in Bride of Chucky, Charles Lee Ray’s girlfriend, a wannabe killer named Tiffany (Jennifer Tilly), bribes a policeman to steal the “Chucky” doll (from Child’s Play 3, in which is was almost completely destroyed) from the evidence room in which it’s hidden.  After dispatching the dumb pig, Tiffany uses voodoo to revive Charles Lee Ray’s spirit and bring the Chucky doll back to life.  However, Chucky isn’t showing Tiffany the love and respect she thought he’d give her as a reward for reviving him.  Pissed off at her antics, Chucky kills Tiffany and uses the same voodoo that transferred his spirit from his dying human body into the Chucky doll (as seen in the first Child’s Play) to transfer Tiffany’s spirit into a bridal doll.

After some initial disagreements, the murderous doll couple, Chucky and Tiffany, band together and coerce two teen lovers-on-the-run, Jesse (Nick Stabile) and Jade (Katherine Heigl) to transport them to the New Jersey graveyard where Charles Lee Ray is buried.  Jesse and Jade are unaware of Chucky and Tiffany’s diabolical plan.  The evil dolls want to use a Satanic voodoo amulet on Ray’s corpse to transfer their spirits in the young lovers’ bodies.

Bride of Chucky doesn’t take itself seriously, but the movie isn’t the kind of comedy that pokes fun of slasher movie conventions and clichés.  Bride of Chucky is less like Scream and more in the vein of something like The Evil Dead.  Chucky creator Don Mancini’s script is a funny and as sarcastic and caustic as Mancini’s earlier Child’s Play scripts.  However, it is director Ronny Yu who seems to take most delight in turning up the comedy even more and transforming this entry in franchise into a gleefully insane and mean-spirited delight.  He seems to go out of his way to offend the sensibilities of even the most tolerant horror movie fans.

It’s that “don’t give a fuck” attitude, probably best exemplified in the delightful voice work of Brad Dourif as Chucky and the special effects work on the doll that makes this film series unique, and Dourif, Mancini, Yu, and the effects crew raise their game for this film.  Although there are times that this film goes too far in terms of violence and seems a bit too bloody, Bride of Chucky is a slasher movie delight, and for this horror fan, damn fun to watch.


Posted by Leroy Douresseaux at 7:55 AM