Review: Berserk: The Golden Age Arc 2 – The Battle for Doldrey 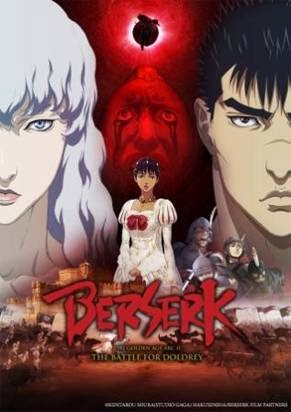 Berserk: The Golden Age Arc 2 – The Battle for Doldrey is a 2012 Japanese animated film (anime) from anime director Toshiyuki Kubooka.  It is a direct sequel to the first film, Berserk: The Golden Age Arc 1 – The Egg of the King, which Kubooka also directed.  This film was released in Japan under its original title, Berserk: Ohgon jidai hen 2 - dorudorei koryaku hen, on June 23, 2012.

Berserk: The Golden Age Arc 2 is based on Berserk, a Japanese manga (comic book) series written and illustrated by Kentaro Miura.  Berserk is set in a fantasy world that is modeled on medieval Europe.  The story centers around the two characters, Guts (Marc Diraison), an orphaned mercenary, and Griffith (Kevin T. Collins), the leader of a mercenary group called the Band of the Hawk.  The King of Midland hired the Band of the Hawk to fight against Chuder, the Midlanders’ adversary during the Hundred Years’ War.

As The Battle for Doldrey begins, the Band of the Hawk is engaged in battle with General Adon and his Blue Whale Ultra Heavy Armored Fierce Assault Annihilation Knight Corps of Chuder.  Adon focuses his attention on Hawk officer, Casca (Carrie Keranen), but when Guts rides to her aid, they both end up imperiled.

The King of Midland has long sought to recover the fortress Doldrey, which is located in Midland’s territory, but which has been in the possession of Chuder for over a century.  Now, the King makes a request that one of his noble lords volunteer to lead an assault against Doldrey in a bid to recover the fortress.  Griffith volunteers the Band of the Hawk, but what chance do his 5000 horsemen have against Doldrey’s 30,000 troops?  Meanwhile, the Band of the Hawk’s success has made Guts restless.

The first time I saw the DVD box art for Berserk: The Golden Age Arc 1 – The Egg of the King, I thought that the movie would not amount to much.  However, I was delightfully surprised; in fact, by the end of the movie, I wanted more.  Obviously I had somewhat higher expectations for Berserk: The Golden Age Arc 2 – The Battle for Doldrey, and the movie easily exceeded those expectations.  This is one of the best films I have seen this year, live action or animation.

The Battle for Doldrey is like a smaller scale version of The Lord of the Rings:  The Two Towers.  The Battle for Doldrey offers character drama in the form of romantic relationships, camaraderie among men-at-arms, introspection of past wrongs, and political intrigue.  The battle scenes are even better.  I have not seen the like in animated films; the blood, gore, and dismemberment was enough to both impress me and to give me pause.  There were times when blood and offal rained on the characters.  The nerdy kid in me yelled, “Awesome!”  If the MPAA rated this, it would definitely give The Battle for Doldrey an “R” rating, if not an “NC-17.”  This animated film has a rather intense and explicit sex scene and an extended torture sequence.


Posted by Leroy Douresseaux at 8:28 AM