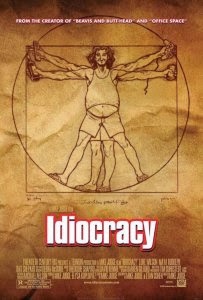 The subject of this movie review is Idiocracy, a 2006 science fiction and satirical comedy film from writer-director, Mike Judge (Office Space).  The film focuses on an “average American” who awakens from a hibernation project five centuries in the future, where he discovers a society that is so incredibly dumbed-down that he is easily the most intelligent person alive.

Idiocracy was essentially produced and abandoned.  20th Century Fox released the film to an estimated 130 theatres – much less than 600 theatres, the number that is usually considered the minimum for a film to be in wide release.  Fox also did little in the way of promotion, and did not screen the movie for film critics.

To test its top secret Human Hibernation Project, U.S. Army officials chose the most average American male they can find, an Army private named Joe Bauers (Luke Wilson).  The most average woman they find is Rita (Maya Rudolph), a prostitute.  Joe and Rita are only supposed to stay in hibernation for one year, but they are forgotten and reawaken 500 years later.  They find civilization so incredibly dumbed-down that they are the smartest people on earth.  The President of the United States of Uhh-merica, Dwayne Elizondo Camacho (Terry Alan Crews), a former professional wrestler, wants Joe to solve the country’s problems (chiefly crop failures), or Camacho will have him rehabilitated – meaning killed.

Idiocracy is director Mike Judge’s long-awaited follow up to his cult hit, Office Space.  Judge is also the creator of the popular animated television series “Beavis and Butt-head” (for MTV) and, co-creator with Greg Daniels of  “King of the Hill” (for FOX).  In this comic sci-fi flick, Judge and his co-screenwriter Etan Cohen transport the audience to a satirical future populated by dumb humans who do nothing but watch TV and who are too dumb to irrigate their crops with water (using instead a sports drink).

Watching this movie, it would not be hard to get the idea that Judge and his creative staff are being unnecessarily cynical, especially when one of the film’s tenets is that dumb people (rednecks, trailer trash, hood rats, etc.) breed too much, while smart people don’t have enough babies.  An underemployed man who lives in poverty and has many children with two or more baby mamas isn’t necessarily dumb, nor are his offspring destined to be big dummies.  To fixate on this, however, would be to take an anal view of the film.  Besides, like much satire, Judge’s Idiocracy is preaching to the choir.

Combine genetic devolution with a populace enslaved to crass media that sells rampant commercialism and entertainment that emphasizes hypersexuality, and you might have a primary ingredient for a dystopian future, even if it isn’t as comically inept as the one presented here.  Judge is trying to make a point about an America where so many people are stubbornly uncurious about their world, the people who live in it, and how their actions affect anyone beyond themselves and maybe the small circle of people around them.  Yet those same people slavishly fixate on the habits and lifestyles of celebrities and assorted public figures.  Judge smartly makes his point with outrageous humor, and truthfully, the film isn’t elitist, it’s just relentlessly and unapologetically funny about making fun of and satirizing its targets.

Luke Wilson is great as a sort of nobody everyman.  He’s the kind of average Joe who tends his little patch of green earth while the rest of the world is engaged in a rat race.  In Wilson’s quiet but well-played role as someone who just doesn’t want to make waves, Judge has the perfect character by which to offer as a contrast to a world of people who are nothing but spoiled dumb children.  They want to be fed, entertained, and pleasured, but they don’t care to clean up after themselves and are too lazy to earn their treats.  Before I make Idiocracy sound like a school lesson, it’s easily one of the year’s funniest flicks.  Referencing Mad Max, 1984, Planet of the Apes, Soylent Green, and other classic cautionary speculative, science fiction, this is the gold standard in satirical comedies.


Posted by Leroy Douresseaux at 8:11 AM