Review: "The Lords of Salem" is Bee-zarre 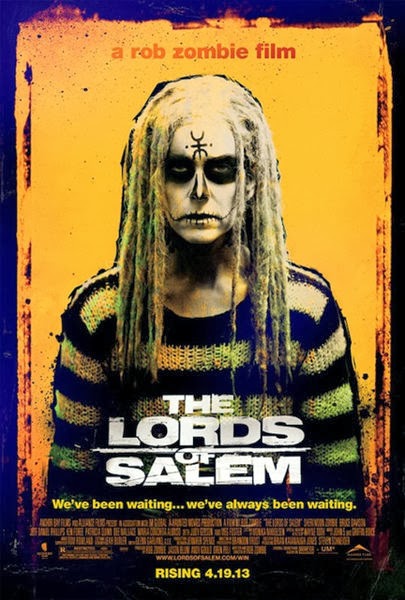 The Lords of Salem is a 2012 horror film from writer-director Rob Zombie.  The film received a limited theatrical release in April 2013.  The Lords of Salem focuses on a radio DJ who receives a strange vinyl record that when played causes her to feel sick and to experience flashbacks of a violent, dark past.

In Salem, Massachusetts, radio station WIQZ has a hot trio of DJs, the “Big H Team.”  One of the DJs, Heidi Lorac (Sheri Moon Zombie), a recovering drug addict, receives a strange wooden box containing a vinyl record from a band called “the Lords.”  Heidi’s fellow DJs, Herman “Whitey” Salvador (Jeffrey Daniel Phillips) and Herman “Munster” Jackson (Ken Foree), decide to call the band, “The Lords of Salem.”  The first time Heidi listens to the record, she has strange visions and feels nauseated.

There are also strange doings at the apartment complex where Heidi lives.  Heidi insists that she has a new neighbor in Apartment 5, but her landlord, Lacy Doyle (Judy Geeson), says that there is no new tenant.  Meanwhile, Francis Matthias (Bruce Davison), an author of a book on witches, is troubled by the name, “The Lords of Salem.”  He begins to research Salem’s dark past involving witches, as Heidi’s visions become more troubling.

The Lords of Salem is like a modern version of Rosemary’s Baby with tattoos and Hepatitis C.  This is not really a typical girl-gonna-have-Satan’s-baby movie, as it has original story elements.  It is horrifying and horrible, meaning that some of it is unsettling and even disturbing, but some of it is ridiculous and unintentionally comical.

Coming from the music industry and having appeared in music videos, Rob Zombie knows how to create an aural-visual experience that captivates the imagination or captures it, if necessary.  To that end, Zombie gets an exceedingly creepy film score from Griffin Boice and John 5, making The Lords of Salem, in some ways, their film.

Once again, Sheri Moon Zombie, Rob Zombie’s wife and muse/art victim, takes the lead in one of Rob’s films.  In The Lords of Salem, she is not so much an actress, as she acts like she needs an intervention and detox.  The best performance in this film belongs to Bruce Davison who brings subtlety and nuance to Zombie chamber piece of bizarre imagery and sacrilege.

The Lords of Salem is an original vision with many familiar elements, but in some ways, the film goes too far without really going too far.  The story offers crazy women forsaking one symbol of male authority for another.  Either way, they seem determined to serve the interests of male genitalia.  The Lords of Salem is not the great movie it could have been, but it gave me the creeps and the willies.  So Rob Zombie’s movie is a must-see for horror fans.