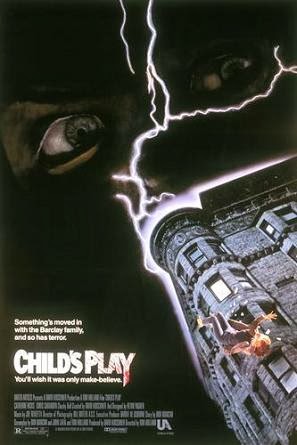 The subject of this movie review is Child’s Play, a 1988 horror film from director Tom Holland.  It was followed by four sequels, the last being 2004’s Seed of Chucky.  In this first film, a single mother gives her young son his favorite doll for his birthday, and later discovers that it is possessed by the soul of a serial killer.

This year marks the 25th anniversary of the first theatrical release of Child’s Play (specifically November 9, 1988).  It has not been that long since I last watched the movie, but it has been awhile.  I decided to watch it again because of the upcoming release of the sixth film in the franchise, Curse of Chucky, which is a straight-to-DVD movie.

Child’s Play opens on the streets of Chicago, where homicide detective Mike Norris (Chris Sarandon) is chasing Charles Lee Ray (Brad Dourif), the serial killer known as “the Lakeshore Strangler.”  After Norris mortally wounds him, Charles uses a bizarre “Voodoo” ritual to transfer his soul into a “Good Guy” doll.

That doll, which is named “Chucky,” ends up in the possession of single-mother, Karen Barclay (Catherine Hicks).  Karen gives Chucky as a birthday present to her six-year-old son, Andy (Alex Vincent).  After the murders begin, Andy is the only one who understands that his doll is the culprit, and that Chucky is planning more murders.

I’ve said for a long time that horror movies should be horrifying or horrible.  Horrible doesn’t necessarily mean low-quality.  An inappropriate joke could be horrible, but still illicit laughter.  Child’s Play is like some screenwriter’s drunken pitch for a horror movie.  It sounds horrible on the face of it, but it works.

I think Child’s Play works so well because of the efforts of the filmmakers, cast, and crew.  On the surface, at least, they take their work quite seriously.  Alex Vincent gives a fantastic performance, the kind of convincing horror movie acting that many adult performers cannot deliver.  As Andy, Vincent’s ability to sell me on Chucky as a genuine, first-rate horror movie villain is timeless.

The adult actors in Child’s Play are also good.  I love Catherine Hicks manic turn as a hysterical mother.  The best adult performance is delivered by Brad Dourif, giving voice to Chucky.  Dourif brings Chucky to life, creating an outrageous, shameless character that rises above the material.  The reason the Child’s Play franchise keeps coming back is because of Dourif’s voice performance.  Dourif makes the first Child’s Play film an evergreen, a perennial, and a classic in the history modern horror cinema.


Posted by Leroy Douresseaux at 7:58 AM