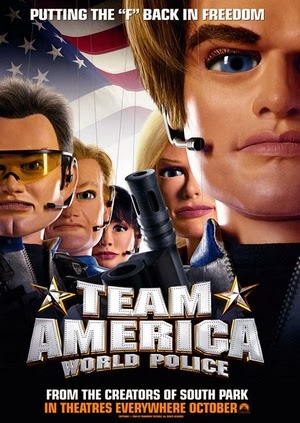 The subject of this movie review is Team America: World Police, a 2004 satirical comedy film from the team of Trey Parker and Matt Stone, the creators of the long-running animated series, “South Park.”  The film’s cast is composed of marionettes (puppets) instead of live actors.  Team America: World Police follows a popular Broadway actor who is recruited by an elite counter-terrorism organization to help stop a dictator who is plotting global terror attacks.

Team America: World Police may be 2004’s funniest film.  Some may consider it the most obnoxious and crass movie of the year, especially after viewing the graphic puppet “sex scene.”  It will certainly go down as one of the most outrageous movies not made by John Waters.  It’s a wonderful send up of action movies, especially as those made by super-producer Jerry Bruckheimer, and the hilarious characters that populate them.  Even the musical scores to Bruckheimer films get it up the butt and in the mouth from this movie.  It’s also a wicked satire of American military aggression and the celebrities who protest it.  However, as good as the film is (and it’s quite good), Team America: World Police frequently falls on its own spear.

Team America is an international police force dedicated to maintaining global security.  And they’re also marionettes; you may best remember marionettes as those puppets on the venerable British TV children’s series, “Thunderbirds.”  Team America’s latest mission takes them to Paris, France, where they fight a handful of terrorists with WMD’s, also known as weapons of mass destruction.  Team America also manages to destroy Paris’ most famous landmarks, and also loose a team member to a terrorist’s bullets.

Team America’s leader, Spottswoode, a gray-headed, older, distinguished gentleman, recruits a young Broadway actor named Gary to replace the fallen comrade.  Spottswoode thinks that Gary will make the perfect spy because in college he was a double major in theatre and world languages.  The other Team America members:  Lisa, Sarah, Chris, and Joe, are wary at first, but they back him up on their first mission to Cairo to infiltrate a band of Islamic fundamentalists with WMD’s.

There is however a larger crisis looming.  Power-mad dictator Kim Jong Il of North Korea has planned a series of simultaneous global terror attacks – imagine 9/11 times 2356.  He’s convinced the Hollywood Film Actors Guild, or F.A.G., and their leader, actor Alec Baldwin, to support a conference in North Korea in which all world leaders will attend.  The conference is merely a cover for the launch of the worldwide terror strikes, which will occur while Baldwin gives his peacenik keynote speech.  Can Team America stop Kim Jong Il…and the actors?

Team America: World Police is the second major studio film from Trey Parker and Matt Stone, the creators of the uproarious and bawdy animated program, “South Park,” on Comedy Central.  Team America, on one hand, is a delightful and loving send up of “Thunderbirds” and the other puppet marionette shows produced by England’s Century 21.  On the other hand, the film is mostly a vicious and brutal satire of the contemporary American political landscape and American self-righteousness.  The use of marionettes instead of actors greatly takes the sense of people getting made fun of to a level that human actors couldn’t go.

Parker/Stone use clever dialogue, over-the-top violence, and hyper-patriotic songs to skewer heavy-handed U.S. military offenses, strikes, and pre-emptive attacks on international locales.  They also use marionettes that closely resemble well known Hollywood and celebrities that protest U.S. military action.  The marionettes, in some cases, barely look like the stars that they’re supposed to resemble; in some cases the resemblance is just close enough not to get the filmmakers sued.  Still, it works enough so that such stars as Alec Baldwin, Tim Robbins, Michael Moore, Susan Sarandon, Matt Damon, Helen Hunt and others are mercilessly lampooned.

But is the movie good?  The answer is a resounding yes; it’s one of the funniest films I’ve seen in years.  However, it is mean-spirited, graphic, obnoxious, brutal, vicious, vulgar, filthy, foul, nasty, rank, etc.  Sometimes, I had a hard time believing that Parker and Stone were going so far in their satire and humor.  Still, they’re not frat boys out of control; every joke and satirical comment and farcical moment seems well conceived.

Team America: World Police, in the end, takes the side of the “good guys,” but Parker and Stone obviously only trust them a little more than the “bad guys.”  They insist that even the protagonists be viewed with a wary eye, so in the end, it’s as if they question that anyone can be trusted.  Fighting assholes who want to kill everyone is a dirty job, and the heroes and their charges may not be “all that” themselves.  Team America: World Police is not perfect, but it’s the work of frankly honest and only barely inhibited filmmakers.  That’s refreshing when “looking good” is so important these days.

Posted by Leroy Douresseaux at 12:39 PM