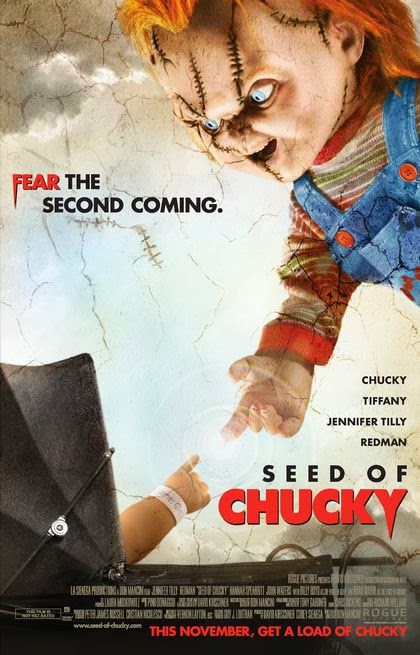 The subject of this movie review is Seed of Chucky, a 2004 comic horror film from writer-director Don Mancini.  It is the fifth movie in the Child’s Play franchise, and a direct sequel to 1998’s Bride of Chucky.  Seed of Chucky spoofs other horror films, trashy TV shows, and celebrity culture.  To date, it is the last film in the franchise to be released in theatres.

Seed of Chucky opens with a new character.  This is the now grown version of the infant creature born (at the end of Bride) of the unholy sexual union of the two killer dolls, Chucky (voice of Brad Dourif) and Tiffany (voice of Jennifer Tilly).  Six years after his birth, the doll-child is a slave to a sleazy ventriloquist named Psychs (Keith-Lee Castle), who might not really be a ventriloquist; Psychs has named the doll creature, Shitface (voice of Billy Boyd).

Trapped in Great Britain, the doll-child eventually escapes to Hollywood, where he finds Chucky and Tiffany dolls on a movie set.  He inadvertently recites the “voodoo” chant that brings Chucky and Tiffany’s spirits back to life in these movie dolls.  Tiffany and Chucky are surprised, but proud parents.  However, they discover that their doll-child is not anatomically correct.  In disagreement about Shitface’s gender, Tiffany names her Glenda, and Chucky names him Glen because he’s sure the child is a boy who will develop later.

The movie set upon which the newly formed family find themselves is a horror movie about Chucky and Tiffany’s infamous murder spree (from Bride of Chucky), and it stars Jennifer Tilly (as herself).  Tiffany is obsessed with being Tilly and thus a Hollywood star, so she hatches a plan to transfer her spirit into Tilly’s body and Chucky’s spirit Tilly’s chauffeur, Stan (Steve Lawton).  But the challenge of raising a child, especially a confused one like Glen/Glenda, stares the murderous pair right in the face and complicates their plans.  Chucky still wants to be a killer, but Tiffany wants to settle down (in Jennifer Tilly), although she must resist the urge to kill, especially when Tilly gets close to rapper-turned-movie director, Redman (as himself), to whom Tiffany takes an instant dislike.  All hell is about to break loose when Tiffany’s dreams of movie stardom clashes with Chucky’s need to kill, and Glen/Glenda is right in the middle, becoming more confused… and more dangerous.

The Child’s Play film series was, from the beginning, heavy with comedy, but the franchise turned solidly to comic horror with Bride of Chucky in 1998.  Seed of Chucky is a deliriously crazy gore fest.  Fake movie blood, steaming imitation intestines, severed limps, a blood-spurting, headless corpse, severed limps, Jennifer Tilly kissing a recently severed head, Chucky jerking off, Chucky holding a cup of his jizz, Tiffany holding a turkey baster full of Chucky’s semen while standing over Tilly’s prone body with the legs in the air, etc. all add up to a camp fest that is one of the few truly outrageously funny horror films outside of the Evil Dead series.  There is almost nothing in Seed of Chucky film that would qualify it as a scary movie, but with the explicit violence and troubling subject matter, Seed of Chucky could only be one of three things – a ghastly satire of the American nuclear family and America’s obsession with celebrity, an offensive horror flick, or a revolting comedy.  At different times in the narrative, the film tries on all three hats.

While I salute writer/director Don Mancini (who created the Child’s Play concept, while Seed’s co-producer Don Kirschner created the Chucky and Tiffany dolls) for being audacious enough to make this movie and while I also credit the studio and producers for letting Mancini put his insanity on the big screen, I am disappointed that the franchise has gotten away from Chucky as the sole antagonist.  I like Tiffany, and Jennifer Tilly’s voiceover work as Tiffany is superb played.  The fun Ms. Tilly has lampooning herself and her acting career (There are many hilarious mentions of the film Bound in which she and Gina Gershon played lovers) carries over to the viewer, but I want more killing.  Watching Chucky stalk victims excites me as much as it fills me with dread.  I root for victims – even the ones that are throwaway or underdeveloped characters, and I want more of that and less (faux) family drama.

In the final analysis, Seed of Chucky isn’t as good a horror movie as Bride of Chucky, but it’s a better comedy, and an outrageous thumb in the eye to taste and decorum.  Imagine this as a kind of underground film made palatable for a mass audience.  Think of it as a John Waters horror flick if Waters (who appears in the film as a paparazzi) made a “straight” horror movie.  I would answer the question of “is it good or bad” by saying Seed of Chucky makes me eager to see a sixth Child’s Play film.


Posted by Leroy Douresseaux at 8:06 AM