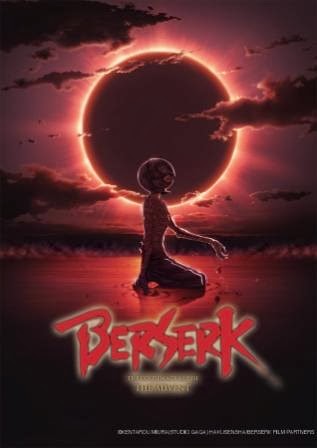 VIZ Media, LLC (VIZ Media), the largest distributor and licensor of anime and manga in North America, delivers the bloody arms and armor action of the BERSERK: THE GOLDEN ARC anime feature film trilogy to Houston for a pair of very special triple-feature screenings at the Alamo Drafthouse Cinema Houston Mason Park and Vintage Park locations.

Tickets are only $15.00 for all three film screenings are on sale now. For specific show times and advance tickets, please visit http://drafthouse.com/movies/berserk-the-golden-age-arc-i-ii-and-iii/houston.

BERSERK: THE GOLDEN AGE ARC film trilogy was produced in Japan by the legendary Studio 4ºC, and is based on the bestselling medieval dark fantasy manga (graphic novel) series created by Kentarou Miura.

BERSERK: THE GOLDEN AGE ARC I – THE EGG OF THE KING (rated TV-MA) follows lone mercenary Guts as he travels the land where a hundred-year-old war is taking place. His ferocity and ability to take down enemies attracts the attention of Griffith, leader of the mercenary group “The Band of the Hawk,” and Guts is recruited to the unit. Thanks to their continued victories on the battlefield, the bond between Guts and Griffith deepens, but despite all their success, Guts begins to question his reasons for fighting for Griffith’s dream. Unknown to Guts, this unyielding dream is about to bestow a horrible fate on them both.

BERSERK: THE GOLDEN AGE ARC II - THE BATTLE FOR DOLDREY (rated TV-MA) picks up the story as Guts mistakenly believed, for three years, that his mission was to pursue Griffith’s dream together with him. But in order to become Griffith’s equal and truly be called his friend, Guts realizes he will have to leave the Band of the Hawk. At the same time, a bloody battle to capture the impenetrable Fortress of Doldrey from the Empire of Chuder is about to begin. The Band of the Hawk will face an army 30,000 strong!

The saga reaches its stunning finale in BERSERK: THE GOLDEN AGE ARC III - THE ADVENT (rated TV-MA). It’s been a year since Griffith’s imprisonment by the Kingdom of Midland. Once praised as the saviors of the Midland, The Band of the Hawk has been on the run and is on the brink of breaking apart. Much to everyone’s surprise, Guts returns to the Hawks and the search for Griffith begins!

The BERSERK manga series, by Kentarou Miura, debuted in Japan in 1989 and quickly drew a devoted following, going on to sell more than 30 million copies worldwide. The series, still ongoing in Japan, has been published in North America and the UK, as well as in France, Germany, Italy, Spain, Russia, and Latin America. The BERSERK manga has also inspired a popular anime television series and has spawned a variety of related video games, collectable figures and toys, and music soundtracks, as well as the current BERSERK: THE GOLDEN AGE ARC film trilogy.

For more information on the BERSERK: THE GOLDEN AGE ARC film trilogy, please visit the official Facebook page at: www.facebook.com/BerserkFilm.