Review: The "Candyman" Can... Still Scare 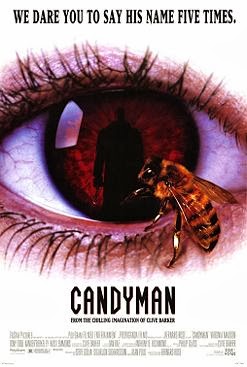 HORROR/THRILLER with elements of fantasy and mystery

The subject of this movie review is Candyman, a 1992 horror film from director Bernard Rose.  The film is an adaptation of “The Forbidden,” a short story by Clive Barker that first appeared in Barker’s short story collection, Books of Blood Volume 5 (published in the United States as In the Flesh).  Candyman tells the story of a grad student who is skeptical of stories about a local boogeyman until the boogeyman attacks her.

Stand in front of a mirror and say his name five times, and Candyman (Tony Todd) will appear behind you.  When someone calls his name, Candyman usually arrives to gut his caller from groin to gullet, but it’s all a children’s ghost story – an urban legend to scare the simpleminded.  That’s what Helen Lyle (Virginia Madsen), a Chicago-based graduate student, believes when she comes across the tale of Candyman while doing research for her thesis on modern folklore.

However, when she hears that Candyman haunts Chicago’s notorious Cabrini Green projects, Helen thinks that she has a new angle for the thesis upon which she is working with her partner, Bernadette “Bernie” Walsh (Kasi Lemmons).  Still, Helen can’t really accept that Candyman exists.  Her actions and investigations also lead to an arrest that seems to put the Candyman tales to rest… until the legend himself appears and ignites a series of gruesome and bloody murders for which Helen gets the blame.

Thirteen years before earning the Oscar nomination that would revive her career (for 2004’s Sideways), Virginia Madsen was a scream queen – the heroine in a now-cult favorite horror movie entitled Candyman.  Based upon legendary horror/fantasy writer, Clive Barker’s, tale “The Forbidden,” Candyman took the unusual narrative approach that the final result of the film had to be that the heroine, in this case Helen Lyle, die in order to save the day.  Not only is Helen fighting a monster, but she’s also fighting a story that wants her dead.  Madsen was perfect as the doe-eyed beauty who swoons from one scene to the next, her plump, semi-Rubenesque body awaiting the fearsome savagery of Candyman’s hook.

Writer/director Bernard Rose (who would go on to direct Immortal Beloved, with Gary Oldman) moved the action from the housing projects of Liverpool, the original setting of Barker’s tale, to Chicago’s then-40-year old, decaying housing projects, Cabrini Green.  Rose’s choice was an excellent one, as he was able to make Cabrini an even more darkly mysterious setting for chills and thrills as good as any haunted house.  Rose makes the first half of the film a quietly, chilling suspense thriller, but he transforms the second half of the film into a dreamy and trippy dark horror/fantasy that only stumbles a little as it waltzes to the end.

The film also features a small role by Kasi Lemmons, who would make a name for herself in Hollywood as both a script doctor and as a director with the acclaimed, independent film hit, Eve’s Bayou.  Tony Todd became something of a horror movie/sci-fi cult actor (kinda like Bruce Campbell) appearing in episodes of “Stargate:  SG-1,” “Star Trek: The Next Generation” and “Star Trek:  Deep Space Nine” and also in the Final Destination horror film franchise.  Here, Ms. Madsen, Ms. Lemmons, Todd, and Rose put together a small, mesmerizing horror treat that bears many repeat viewings.


Posted by Leroy Douresseaux at 7:59 AM