Review: Fun Never Ends in "This Is the End" 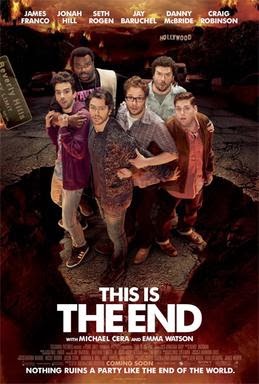 This Is the End is a 2013 apocalyptic comedy film from writer-directors, Seth Rogen and Evan Goldberg.  This black comedy features a number of Hollywood comic actors and celebrities playing fictional versions of themselves.  The movie centers on actor James Franco’s house where a small band of survivors are forced to live together after a disaster that could be the end of the world.

This Is the End begins with Jay Baruchel arriving in Los Angeles to visit his old friend and fellow actor, Seth Rogen.  Seth convinces Jay to go with him to a housewarming party hosted by actor James Franco.  Jay is reluctant because he does not like Seth’s L.A. friends, especially actor Jonah Hill.  During the party, a catastrophic earthquake occurs, and L.A. falls to fire and chaos.  Jay, Seth, James, Jonah, and Craig Robinson survive the destruction, but they are not alone.  They slowly learn that the largest earthquake in California history may be more than just a natural disaster.

In his review of This Is the End for Maclean’s, critic Brian D. Johnson basically said that there could be worse ways to experience the apocalypse than with stoned celebrities (go here or http://www2.macleans.ca/2013/06/07/was-armageddon-always-this-complicated/ for the full review).  Other than spending it with my family, there is no better way to go through the end of the world than with fun, fictional versions of Seth Rogen and his friends.  Also, much of the middle of the film works like a comedy stage play that allows each member of the ensemble to fashion a character that engages the audience.

I like many of the films in which most members of the main and supporting cast have appeared.  For the most part, I also like their public personas.  They are all really funny in this film, and James Franco’s sardonic humor (which was too understated to work during his gig hosting the Oscars) shines.  Once again, Craig Robinson finds a way to turn a supporting comedy part into a co-leading role on the sheer strength of his underrated talent as a light comic actor.  Danny McBride steals the show; if any actor deserves an Academy Award nomination as a supporting actor this year because of a comedic performance, it is McBride in This Is the End.

This Is the End was made for me.  I liked what the actors did in this movie, and I liked how they were willing to savage their public personas and work in films.  This Is the End of the review but not of my love for this movie, which will go on...


Posted by Leroy Douresseaux at 2:11 PM