Review: Steven Spielberg's "Close Encounters of the Third Kind" (Countdown to "The Fabelmans") 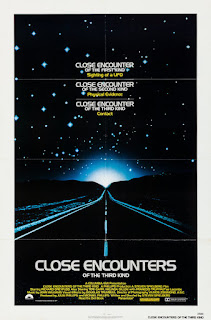 Close Encounters of the Third Kind is a 1977 science fiction film written and directed by Steven Spielberg.  The film follows an everyday blue-collar worker from Indiana who has a life-changing encounter with a UFO and then, embarks on a cross-country journey to the place where a momentous event is to occur.

Close Encounters of the Third Kind opens in the Sonoran Desert.  There, French scientist Claude Lacombe (François Truffaut), his American interpreter, David Laughlin (Bob Balaban), and a group of other researchers make a shocking discovery regarding a three-decade-old mystery.

Then, the film introduces Roy Neary (Richard Dreyfuss), an rural electrical lineman living in Muncie, Indiana with his wife, Ronnie (Terri Garr), and their three children.  One night, while working on a power outage, Roy has a “close encounter” with a UFO (unidentified flying object).  The encounter is so intense that the right side of Roy's face is lightly burned, and it also becomes a kind of metaphysical experience for Roy.  He becomes fascinated with the UFO and obsessed with some kind of mountain-like image that won't leave his mind.

Roy isn't the only one who has had a close encounter.  Single mother Jillian Guiler (Melinda Dillon) watches in horror as her three-year-old son, Barry Guiler (Cary Guffey), is abducted, apparently by a UFO.  Now, Roy and Jillian are headed to a place they have never been, Devils Tower in Moorcroft, Wyoming, where they will hopefully find answers to the questions plaguing their minds.

As I await the release of Steven Spielberg's semi-autobiographical film, The Fabelmans, I have been re-watching and, in some cases, watching for the first time, Spielberg's early films.  Thus far, I have watched Duel (the TV film that first got Spielberg noticed), The Sugarland Express (his debut theatrical film), and Jaws (which I have seen countless times).  I did not see Close Encounters of the Third Kind when it first arrived in movie theaters, but I finally got to watch it when it debuted on television.  I recently watched a DVD release of what is known as Close Encounters of the Third Kind: The Special Edition, a shortened (132 minutes long compared to the original's 135 minutes) and altered version of the film that Columbia Pictures released in August 1980.

The truth is that I have never been as crazy about Close Encounters of the Third Kind the way I have been about such Spielberg's films as Jaws, Raiders of the Lost Ark, and Jurassic Park.  I liked Close Encounters the first time I saw it (a few years after its theatrical release), but I had expected a lot from it after hearing such wonderful things about the film from acquaintances who had seen it in a theater.  I was a bit underwhelmed,.  I liked Close Encounters, but was not “wowed” by it, and was less so the second time I saw it a few years after the first time.

Close Encounters of the Third Kind is a combination of science fiction, adventure, drama, and mystery.  The drama works, especially when Spielberg depicts the trouble that Roy Neary's obsession causes his family and also the terror of the “attack” on Jillian Guiler and her son, Barry.  Roy's adventure and journey are quite captivating and result in the events of the film's final half hour, which is the part of the film that many consider to be marvelous.  Close Encounters' last act certainly offers an impressive display of special effects and a dazzling light show.

Posted by Leroy Douresseaux at 1:49 PM