Review: Steven Spielberg's THE SUGARLAND EXPRESS (Countdown to "The Fabelmans") 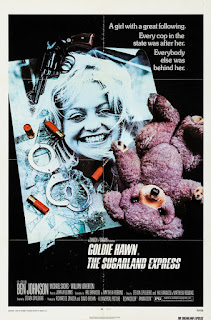 The Sugarland Express is a 1974 crime drama, road movie, and action film directed by Steven Spielberg.  The film is Spielberg's directorial debut in theatrical films.  Based on a real life event, The Sugarland Express focuses on a young woman and her prison-escapee husband who go on the run in order to retrieve their toddler son from foster care.

The Sugarland Express opens in 1969 and introduces 25-year-old Lou Jean Sparrow Poplin (Goldie Hawn).  She visits her incarcerated husband, 25-year-old Clovis Michael Poplin (William Atherton), at the Beauford H. Jester Unit, a pre-release center of the Texas Department of Criminal Justice.  Lou Jean wants to tell Clovis that their son, two-year-old Baby Langston (Harrison Zanuck), has been placed in foster care by the Child Welfare Board.

Lou Jean convinces Clovis that she is breaking him out of prison, although he only has a few months left in pre-release, so that they can retrieve their child.  After sneaking out of the prison, the couple ends up in a car crash.  They waylay a Texas Highway Patrolman, Trooper Maxwell Slide (Michael Sacks), and taking him hostage and taking possession of his patrol car.  Clovis and Lou Jean go on the run, headed for Sugarland, Texas, the home of Baby Langston's foster parents.  Meanwhile, Captain Tanner (Ben Johnson) of the Texas Highway Patrol, leads an ever-growing caravan of police cars in dogged pursuit of Lou Jean and Clovis.

In anticipation of Steven Spielberg's upcoming “semi-autobiographical film, The Fablemans, I am perusing his filmography.  I started with the television movie that first got him noticed, Duel (1971), and now I am at his first theatrical film.

The Sugarland Express is based on a real event that occurred in Texas in the spring of 1969.  The film's lead characters, Lou Jean and Clovis, are not so much likable as they are pitiable because they are so stupid.  Goldie Hawn gives a good performance as Lou Jean, but this isn't a “Goldie Hawn picture,” although her name is placed above the title on movie posters.  However, Trooper Slide and his boss, Captain Tanner (played by the great Ben Johnson), are quite likable or even lovable.  Still, this film is not so much about the characters as it is about the situation.

I think that what makes this film really work is how Steven Spielberg plays out the situation as a film narrative.  I've always said that he gets the best out of his cast, crew, and creatives.  The Sugarland Express is a slow-moving train wreck because the conductors, Lou Jean and Clovis, don't know what they are doing and do not really think out their decisions.  Yet, they are … pulling a train of cop cars, and Spielberg's attention to the thrilling and exciting aspects of this situation:  car chases and crashes, shoot-outs, colorful locales, etc. add some zing to this express to Sugarland.

He finds time to give us just enough of a taste of the Bonnie and Clyde-like Lou Jean and Clovis and of Captain Tanner and Slide to keep the audience interested in the fate of the characters, if not the well-being of all.  Even the Poplins' fans and admirers are a motley lot of lovable regular folks.

As the film races towards its end, Spielberg turns The Sugarland Express into a mesmerizing thriller.  Every performance, small and large, takes on dramatic heft, and the audience knows one thing – this shit is for real, now.  Seriously, it is in the last half-hour of The Sugarland Express that we can see the style and techniques that Spielberg used in his second film, Jaws, a legendary blockbuster movie and one of the most influential films of the last half-century.