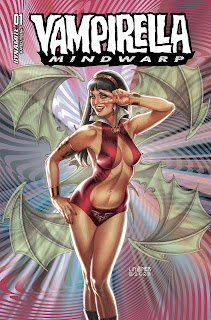 In 2010, Dynamite Entertainment obtained the character and has been publishing new Vampirella material since then.  The latest is Vampirella Mindwarp Volume 1.  This new series is written by Jeff Parker; drawn by Benjamin Dewey; colored by Dearbhla Kelly; and lettered by Jeff Eckleberry.  The series follows a mad chase across time and space, as an aged sorceress tries to steal and inhabit Vampirella's body.

Vampirella Mindwarp Volume 1 #1 opens in New Orleans, Louisiana.  Vampirella is in a pitched battle … with a werewolf?!  And it's in the middle of the street.  Many people are witness to this astounding sight, but one watcher in particular is part of plot against Vampirella.  His name Ren Darton, and he has quite a story to tell and a strange place to take Vampirella.

THE LOWDOWN:  Since July 2021, Dynamite Entertainment's marketing department has been providing me with PDF review copies of some of their titles.  One of them is Vampirella Mindwarp Volume 1 #1, which is one of many Dynamite Vampirella comic books I have read.

I usually enjoy Jeff Parker-written comic books.  I thoroughly enjoyed Future Quest, his twelve-issue, Hanna Barbera remix for DC Comics.  Still, I was surprised at how much I really like Vampirella: Mindwarp.  I have read many Vampirella first issues, but Mindwarp may have been the most fun I've had reading one of them.  Parker offers a confident Vampirella who is more like a trouble-shooter than vampire.  The villain, Baroness Gruzal, is delightfully evil and vile, and Ren make for a good sidekick type.  Plus, Vampirella's battle with the werewolf and the story behind the battle are gold.

Benjamin Dewey's art is pretty and his storytelling is clean, straight-forward and dynamic.  Dearbhla Kelly's colors make the art pop, and Jeff Eckleberry's letters make the story pop off the page.

Vampirella: Mindwarp #1 is freaking awesome.  I want you to read it, and I want to read more of the series – soon.

I READS YOU RECOMMENDS:  Fans of Vampirella comics will want to read Vampirella Mindwarp Volume 1.