Review: Steven Spielberg's "JAWS" is Still Hungry For Your Ass (Countdown to "The Fabelmans") 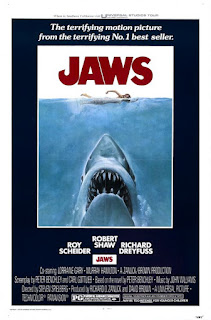 Jaws is a 1974 adventure drama and thriller film directed by Steven Spielberg.  The film is based on the 1974 novel, Jaws, by author Peter Benchley, who also wrote (with Carl Gottlieb) the screenplay adapting his novel. Jaws the film is set in and around a beach community that is dealing with a killer shark and focuses on the police chief who leads a team to hunt down and kill the creature.

Jaws opens in the New England beach town of Amity Island.  During a nighttime beach party, a young woman, Christine “Chrissie” Watkins (Susan Backlinie), goes skinny dipping in the ocean.  While treading water, something unseen attacks Chrissie and pulls her under the water,  The next day, local police Chief Martin Brody (Roy Scheider) and Deputy Hendricks (Jeffrey Kramer) find the partial remains of Chrissie's body on the shore of the beach.

The medical examiner concludes that Chrissie died due to a shark attack.  Still, Amity's Mayor Larry Vaughn (Murray Hamilton) is more concerned with the town's summer economy, which is wholly reliant on tourism, and does not want the beaches closed.  Then, the fact that a shark, specifically a “great white shark,” is hunting the waters off the island becomes reality when the shark attacks and kills a boy named Alex Kintner (Jeffrey Voorhees).

After another attack, Chief Brody takes matters into his own hands.  He joins Matt Hooper (Richard Dreyfuss), a marine biologist who specializes in shark, and Quint (Robert Shaw), a crusty old shark fisherman, on a seafaring mission to hunt and kill the shark.  But that mission proves more difficult than any of the many realized.

I have seen Jaws so many times that I have lost count.  Still, the movie seems eternally fresh to me, in a semi-sepia tone kind of way.  Jaws fascinates me because it seems to me, at least, to be like three short films merged into one film.  The first section introduces the shark attacks and Chief Brody's misgivings and investigations.  The second section pits Brody against the town fathers, led by money grubber, Mayor Vaughn, who want the beaches open at all cost.  The film's final section focuses on the boys' adventure of Brody, Matt Hooper, and Quint going shark-hunting and ending up being the hunted.  As much as I enjoy the film's final act, I find the first section of the film to be the most intriguing because of its sense of mystery.  What is really beneath the waves, coming up to chomp on young folks?

Jaws is essentially the prototypical summer blockbuster, a kind of film that is designed to get as many people into movie theaters and chomping on popcorn and guzzling soda.  The blockbuster, especially the summer kind, is the cinema of the sensations:  thrills and chills to make the viewer's body tingle and get the heart racing.  The bracing action scenes keep the viewer on the edge of his or her seat.  Steven Spielberg turned out to be the perfect director of summer blockbusters – at least for awhile.  He could press all our emotional buttons and ensnare our imaginations so that all we thought about was what he wanted us to think about – for two or so hours.

Still, Spielberg's prodigious skills as a filmmaker are evident.  He is a superb film artist and a consummate cinematic entertainer.  He gets the best out of his cast and crew and creatives – from composer John Williams' iconic and ominous shark-presence theme to Bill Butler's expansive cinematography that turns this movie into a vista of natural wonders.  Plus, Spielberg allows his talented cast to really show their dramatic chops, especially Richard Dreyfuss as Matt Hooper and Richard Shaw as Quint.  Even Lorraine Gary gets to make the most of her moments as Ellen Brody.

If I am honest, however, Spielberg has a co-captain on this ship.  Roy Scheider (1932-2008) brings the film together and at times, holds it together.  Steady as a rock, Chief Brody epitomizes the small town law man who has to save the town not only from the bad guy – a shark in this instance – but also from themselves.  I think serious movie lovers and film fans recognize both the breath and depth of Scheider's talent and that he was a mesmerizing film presence.  If Jaws is the film that shot Spielberg's career into the stratosphere like a rocket, Scheider can certainly be described as the rocket booster.

Posted by Leroy Douresseaux at 1:06 PM