Review: In "THE BLACK PHONE," the Children Answer the Call 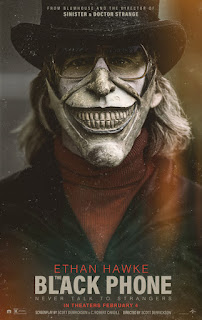 The Black Phone is a 2022 supernatural horror, mystery,and crime thriller from director Scott Derrickson.  The film is based on the short story, “The Black Phone,” from author Joe Hill.  The story was first published in the The 3rd Alternative No. 39, the Autumn 2004 issue of the former British horror magazine.  The Black Phone the movie focuses on a teen boy who is abducted by a child killer and imprisoned in a basement where he starts receiving phone calls from a disconnected phone.

The Black Phone opens in North Denver, 1978.  A presumed serial killer, nicknamed “The Grabber” (Ethan Hawke), has been prowling the streets of a particular Denver suburb and abducting teenage boys.  Shortly after the film begins, a boy named Bruce Yamada (Tristan Pravong) disappears and is presumed a victim of The Grabber.

Teen Finney Blake (Mason Thames) lives in this North Denver suburb with his younger sister, Gwen Blake (Madeleine McGraw), and their abusive, alcoholic, widowed father, Terrence Blake (Jeremy Davies).  At school, Finney is frequently bullied and harassed, but he has struck up a friendship with a classmate, Robin Arellano ( Miguel Cazarez Mora), who fends off the bullies.  Then, the Grabber gets Robin.

Meanwhile, Gwen, who has psychic dreams like her late mother, dreams of a masked man who drives a van and kidnaps Bruce, leaving black balloons in his wake.  Then, Finney has a violent encounter with the Grabber.  Finney awakens in a soundproofed basement where the Grabber has imprisoned him.  On the rear wall is a black rotary phone that the Grabber says does not work.  The black phone is supposedly disconnected, but later, the phone rings.  When Finney answers it, he here's a familiar voice – a voice of one of the Grabber's victims.  Now, Finney must rely on the instructions of ghosts, his own shaky bravery, and (unknown to him) the dreams of Gwen if he is going to survive the murderous plans of a maniac.

It takes a bit to really get into the nonsensical scenario:  a guy drives around in a pitch black van, snatching kids in the middle of the day, practically right out in the street, and no one sees a thing.  However, co-writer/director Scott Derrickson and co-writer C. Robert Cargill thrive on generating scares out of ridiculous scenarios, such as in their 2012 creepy horror film, Sinister.  Truthfully, horror films should not necessarily make sense; whether the film is driven by a killer, demonic possession, or haunting, horror films are a fantastic scenario.  Scary movies should not be logical or perhaps, be somewhat illogical.  Still, until the Grabber grabs Finney, I was not invested in the film, although I was already feeling some fear.

That said, the children are the stars of this film, especially the siblings, Finney and Gwen Blake.  Finney tries to find answers in the mysterious phone calls he receives on the disconnected black phone.  Gwen battles her own doubts even as she deals with an abusive father who is afraid of what will become of her and her abilities, to say nothing of the two police detectives who must come around to believing her visions.

The Black Phone is one of those times when both a boy and a girl come of age and undergo the heroic journey at the same time in the same movie.  That makes the struggle and victory all the more satisfying.  Mason Thames as Finney and Madeleine McGraw as Gwen are convincing as both the heroes and as the sensible ones.  They make The Black Phone's last act visceral and invigorating, and dear readers, you will vicariously fear for your life, which makes the resolution so, so satisfying.  It is rare that I cheer the end of a horror movie, but I did it for The Black Phone.