Comics Review: "PRODIGY: The Icarus Society #3" is Produced by Prodigies 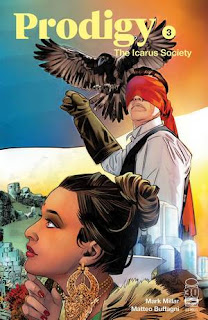 Prodigy: The Icarus Society is a five-issue comic book miniseries produced by writer Mark Millar and artist Matteo Buffagni.  It is a sequel to the 2018-19 six-issue miniseries, Prodigy.  The Prodigy comic books focus on the adventures of the world's smartest man, Edison Crane, who believes that he is the go-to guy when there is a global crisis to solve.  Letterer Clem Robins and colorists Laura Martin and David Curiel complete the sequel's creative team.

Prodigy: The Icarus Society #3 opens in the Himalayas, 1722, detailing two parties searching for the mythical kingdom of “Shangri-La.”  One of them is led by the pirate, Red Ana de Tourzel.  Three centuries later, Edison Crane is caught between the machinations of Icarus Society rivals.  One is the homicidal Professor Tong, and the other is Felix Koffka, the richest man in the world and the owner of the cars in which John F. Kennedy and James Dean respectively died.

When one outwits the other (or so it seems), Edison is working for man who works at a level no one else can understand.  For Edison, that means a journey into legend.

THE LOWDOWN:  Mark Millar has produced some incredible comic books since he became a Netflix executive.  The Magic Order is one of the twenty-first century's greatest comic books about magic.  Meanwhile, Prodigy has emerged as a spinner of conspiracies, legends, myths, and lore to rival cable network, The History Channel's “Ancient Aliens” television series.

Over the past quarter-century, Millar has been writing some of the most interesting and unique superhero comics:  The Authority, The Ultimates, Ultimate X-Men, Ultimate Fantastic Four, Wanted, Kick-Ass, and Nemesis, to name a few.  I think Prodigy should be added to that list.  While its star does not wear a costume, Edison Crane has the elements of such clever superhero characters as Tony Stark, Bruce Wayne, Karnak (The Inhumans), and Ozymandias (Watchmen), to name a few.  The difference is that Millar sends Edison on better adventures than those other characters have had in years, and Edison is better dressed.

Artist Matteo Buffagni has a drawing style that merges the clean line style, photo-realism, and textured inking.  The result is storytelling that captures the intimacy and violence of the conflicts between characters and the endless possibilities of the adventures before them.  David Curiel's colors convey the shadows and dark moods of Buffagni's compositions, while letterer Clem Robins makes the dialogue pop off the page with menace and mystery.

Mark Millar has stated that he wants to write comic books that readers really enjoy reading, and, in addition to his writing skills, he has a talent for gathering superb creative talent.  Prodigy: The Icarus Society #3 is the result of superb talent working hard for our enjoyment.

Posted by Leroy Douresseaux at 12:32 PM