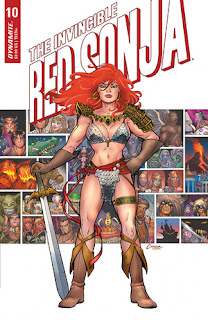 In 2005, Dynamite Entertainment began publishing comic books featuring differing versions of the character.  One of those is The Invincible Red Sonja.  It is written by Amanda Conner and Jimmy Palmiotti; drawn by Moritat; colored by Matt Carter and Sal Monaco; and lettered by Dave Sharpe.  In this series, Red Sonja is joined by the wing Tuma; the dispossessed Prince Ederik and Princess Zaria; and the Darklanders, Rok and Kai.

The Invincible Red Sonja #10 opens in the homeland of Princess Zaria, the Kingdom of Belanj Valley.  Red Sonja has returned Zaria and her betrothed, Prince Ederick, of the destroyed Kingdom of Erkhara, to the princess' home.  However, they find that the kingdom is in ruins, with many people dead, including the king, Zaria's father.

The destroyer is Blackwing, and he has taken Zaria's mother, Queen Zahani, whom he has always coveted.  Now, Red Sonja leads Zaria, Ederik, and a woman named Neenia, who lost her husband and sons to Blackwing and his hordes, into the belly of Blackwing's encampment.  Can Red Sonja put an end to the last threat on this incredible journey?  And will Zaria and Ederick finally marry?

THE LOWDOWN:  Since July 2021, Dynamite Entertainment's marketing department has been providing me with PDF review copies of some of their titles.  One of them is The Invincible Red Sonja #10, which is the seventh issue of the series that I have read.

Writers Amanda Conner and Jimmy Palmiotti bring their epic Red Sonja series, The Invincible Red Sonja, to a delightful and satisfying end.  I think it will make for a better read in one large trade paperback collection.  This will make it easier for readers to see this vulnerable, yet fierce and ballsy take on Sonja show all her sassy and bold self.

Artist Moritat and colorist Sal Monaco end the series with the prettiest issue of the entire run.  The entire issue seems like a tribute to Frank Thorne, the artist who made Red Sonja worth objectifying.  Dave Sharpe's clear lettering zips the reader through the story, and his work, like that of the rest of this series' creative team, will leave you wanting more.  But for now, Invincible Red Sonja has come to an end, and she is on to her next journey.

Posted by Leroy Douresseaux at 11:55 AM