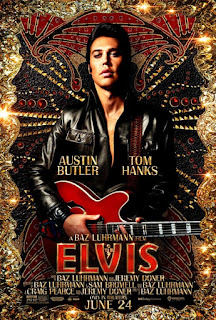 Elvis is a 2022 biopic, musical drama, and historical film from director Baz Luhrmann.  The film is an overview and fictional account of the life of Elvis Presley (1935–1977), the singer, songwriter, performer, and actor best known as simply “Elvis” and also as the “King of Rock and Roll.”  Elvis the movie examines his life – from his childhood to his rise to cultural icon status – and his complicated relationship with his notorious manager, Colonel Tom Parker.

Elvis opens in 1997 and introduces Colonel Tom Parker (Tom Hanks).  After suffering a stroke, he is on his deathbed.  His gambling addiction has left him broke, but once upon a time, he was somebody.  He was both famous and infamous.  He was the manager of Elvis Presley, the King of Rock and Roll.

Early in his life, Elvis Aaron Presley (Chaydon Jay) was a just a kid whose family had moved into a housing project in the white section of an African-American neighborhood in Memphis, Tennessee (1948).  Elvis' family was poor, and his father was in prison.  Elvis, already familiar with country music, became steeped in the gospel music of the nearby Black churches and also in the rhythm and blues of the Black clubs and music halls on Memphis' Beale Street.

Later (1955), when Colonel Parker meets the now adult Elvis Presley (Austin Butler), he is making waves as a young singer and guitarist.  Parker is already partnered with country singer, Hank Snow (David Wenham), when he hears Elvis, a young white artist who sounds black, especially on the groundbreaking single, “That's All Right.”

Soon, Parker is managing Elvis, and the young man's stage performances are making him very popular with young people, especially young women, who are driven crazy by Elvis' salacious wiggling legs, swinging hips, and thrusting pelvis.  Under Parker's management, Elvis begins a meteoric rise to stardom, but his stage act is drawing the ire of white people who don't want their kids exposed to Black music and culture.  To save Elvis from trouble, Colonel Parker exerts more control over Elvis' music, performances, and life, but what will that do to Parker and Elvis' already complex relationship?

Hard as it is to believe, Australian filmmaker Baz Luhrmann has only directed six films in his thirty-year career, beginning with his 1992 debut, Strictly Ballroom, which I have never seen.  Other than Elvis, I have only seen Luhrmann's William Shakespeare's Romeo + Juliet (1996) and Moulin Rouge! (2001), and I have only reviewed the latter.

Elvis is like Moulin Rouge!, a flashy, fast-moving musical drama with excellent production values.  Everything about Elvis is lavish, spectacular, fabulous and beautiful.  The production design, art direction, and sets are the most beautiful that I have seen this year and maybe in a long time.  The costumes, regardless of the characters' wealth and social status, are gorgeous (the only word I can think of).  The cinematography and lighting create a world of fantasy, and the film editing manages to convey the seemingly incalculable number of moods and emotions that Luhrmann wants the audience for Elvis to experience.

The soundtrack is filled with Presley's iconic recordings, including some sung by Austin Butler.  There are a number of famous gospel and blues songs performed by their legendary originators.  There are also modern jams, some reinterpretations of classic songs, including the work of Elvis.

Simply put, Austin Butler makes you believe that he is Elvis Presley.  Butler seems to channel everything that made Elvis an icon and a legend.  Even Elvis' ex-wife, Priscilla, and daughter, Lisa Marie Presley, were awed by Butler's performance.  For anyone to beat Butler to the Oscar this year, they will have to be as amazing as him.

As for the entire film:  Elvis is at its best when it chronicles Elvis' rise before he enters the military service (the U.S. Army 1958-60).  When Elvis is close to his Memphis roots and hanging around Black singers and performers, he is happy and so is the film.  Post-military, the film is still beautiful to look like, but the film takes a darker turn as Elvis is disconnected from his roots and becomes surrounded by white people, most of whom are parasites.  And the ones that are not parasites are manipulators.

Tom Hanks' Colonel Tom Parker is one of the most ridiculously awful and awfully ridiculous film characters that I have ever seen.  Hanks' Parker is like a mix of “Pennywise the Clown” from the It films (based on the Stephen King books) and a mangy elf.  Parker epitomizes the morass that drags at the film for most of its running time.  Hanks' Parker does make one of the film's themes obvious and true.  Maybe, Elvis and Parker snowed themselves as much as they snowed each other.

My grade reflects how much I like this film's production values, music, and Austin Butler's performance.  Butler is the shining light of Elvis.  I could watch him play Elvis Presley again – in a better film.