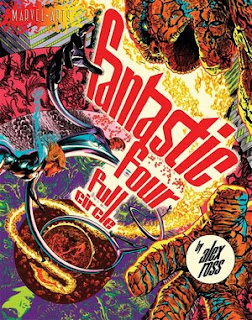 The Fantastic Four #1 (cover dated: November 1961) is the comic book that basically started what we know of today as Marvel Comics and the “Marvel Universe” of superheroes.  The Fantastic Four was created by writer Stan Lee and artist Jack Kirby, with Lee writing the story for the first issue and Jack Kirby drawing that first issue.

Returning to the Lee-Kirby era, Fantastic Four: Full Circle is a new original graphic novel from writer-artist Alex Ross.  Published in an oversize format, 8½ x 11, Full Circle features the Fantastic Four (FF):  Mister Fantastic (Reed Richards), the Invisible Woman (Susan Storm Richards), the Human Torch (Johnny Storm), and the Thing (Ben Grimm).  In a story that is a sequel of sorts to a classic issue of the Fantastic Four, the members of the team find themselves fighting for survival in the Negative Zone, an alien universe composed entirely of anti-matter.  The rest of Full Circle's creative team is comprised of Josh Johnson, who colors this comic book with Ross, and letterer Ariana Maher.

Fantastic Four: Full Circle opens on a rainy night in the Baxter Building, the Manhattan home of the FF.  Ben is making himself a sandwich when an intruder suddenly appears in the team's living quarters.  Upon investigation, they discover that the intruder is a man who once masqueraded as Ben Grimm.  They soon discover that the man is a human host, used to deliver a swarm of invading parasites – carrion creatures composed of “Negative Energy.”

What is the purpose behind this invasion, and who is behind it?  Now, the Fantastic Four have no choice but to journey into the heart of the Negative Zone, an alien universe that is parallel to Earth's universe and is composed entirely of anti-matter.  They not only risk their own lives, but also the fate of the cosmos?  Is there any hope for this journey, or will they discover hope?

THE LOWDOWN:  I like that Fantastic Four: Full Circle has a direct connection to the Fantastic Four's vintage era (as I call it) when it was produced by Stan Lee and Jack Kirby.  Full Circle directly connects to and is a resolution of Fantastic Four #51 (cover dated: June 1966).  Entitled “This Man... This Monster!,” the story pit Reed Richards against an unnamed scientist who gives himself the powers and appearance of The Thing.  The scientist's plan is to kill Richards, but those plans ultimately force him to save Reed's life while condemning himself to a sorry fate.

Full Circle returns to “This Man... This Monster!” in a deeply intimate way, or, at least, that is the way it comes across to me.  In terms of graphics, illustrations, and colors, Full Circle is a direct descendant of the Lee-Kirby Fantastic Four.  If Fantastic Four #51 is the parent, then, Full Circle is the child.  Jack Kirby's dynamic, cosmic infused compositions are newly infused with the modern flourishes of the techno-marvels of software graphics and colors.  Alex Ross even gives Stan Lee's chatterbox expositions new life simply by multiplying them in Full Circle, and Ross' take feels authentic.  When one of the Fantastic Four speaks, their dialogue reads as if it were written by Stan the Man himself.

Alex Ross’s art in Full Circle is a combination of impressive line work and layers of brushwork that seems to sway like drapery.  Ross and Josh Johnson color Full Circle in fluorescent shades: blues, greens, oranges, and purples.  Their color choices also recalls the visuals and graphics of the “Pop Art” comic book movement (or moment) of the 1960s, somewhat similar to writer-artist Jim Steranko's work for Marvel, such as Nick Fury: Agent of S.H.I.E.L.D., in the late 1960s.

For a long time, I have described the comic books published in the 1960s by DC Comics and Marvel Comics, especially Marvel, as having a sense of wonder and mystery, of science/magic and hope, and of discovery and exploration.  The modern comic book series that best exemplifies that is the late Darwyn Cooke's 2004 comic book miniseries, DC: The New Frontier.

Fantastic Four: Full Circle is both an homage and a return to a time when Marvel's comic book titles were about discovering the new.  [Now, they are about IP maintenance and continuity, which is mostly fractured.]  I love Ariana Maher vintage-styled lettering and the throbbing coloring that Josh Johnson commits with Alex Ross.  All of it connects past and present.

I love that Alex Ross has presented Fantastic Four in this larger than usual format.  Here, Ross' big, almost widescreen art both captures and replicates the big spirit and cosmic yearnings of Jack Kirby's best work on the Fantastic Four.  I want to avoid spoilers, but I love Full Circle's ending, with its emphasis on hope, reconciliation, and peace.

Fantastic Four: Full Circle is published as the launch of “MarvelArts,” a new collaborative line of books between Marvel Comics and Abrams ComicArts.  Abrams tells us that in MarvelArts “nothing is impossible and anything can happen.”  I hope that this means that Abrams ComicArts will not just publish anything.  Future publications should be as ambitious and as classically Marvel as this debut.