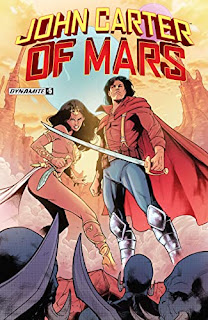 John Carter of Mars Volume 1 #5 opens in John Carter's mind, as he contemplates the sins of his past and the destiny that is his future.  Now, it is time for him to join his wife, Dejah, and the human, Thai, in their battle to stop the conspiracy against Earth and Mars hatched by the Therns and their Green Martian allies.  Meanwhile, Thai's husband, Lt. Fred Hines, and his fellow army officer, Charlie, travel through the “Carrion Caves” to retrieve the “Ninth hands.”

Ninth technology can bring the humans back to Earth and send the Barsoomians back to Mars, but only if John Carter can use his abilities to destroy a deadly meteor of Ninth metal hurtling towards Mars. However, in order to save two worlds, someone must make an impossible sacrifice...

THE LOWDOWN:  Since July 2021, Dynamite Entertainment's marketing department has been providing me with PDF review copies of some of their titles.  One of them is John Carter of Mars Volume 1 #5.  It is the fourth fifth Dynamite John Carter comic book that I have read.

Writer Chuck Brown brings his fresh take on John Carter to a close.  Brown fills this series with strong action and violence and constant plot twists and turns.  John Carter of Mars is a revamp of the franchise into an energetic science fiction adventure with an ensemble cast of heroes.  It feels like there are numerous possibilities for another series.

Artist and colorist George Kambadais shines throughout this series with his splashy graphic design and dynamic illustrations.  He brings Brown's script to life as a fast-paced comic book that feels as if it not only spans worlds, but also time.  Kambadais' art super-charges Brown's script, from beginning to end, and the result is a thoroughly satisfying read.

John Carter of Mars is fun, and it feels like there should be more.  Dear readers, enjoy this while I hope for another adventure across two worlds.