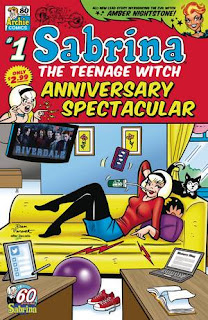 Sabrina the Teenage Witch is an Archie Comics character that was created by writer George Gladir and artist Dan DeCarlo.  Sabrina Spellman first appeared in Archie's Madhouse #22 (cover-dated: October 1962).  2022 is the sixtieth anniversary of Sabrina's debut, and Archie Comics is honoring the character with the “60 Years of Magic” celebration.

Sabrina Anniversary Spectacular #1 opens with “Celebration Vexation,” and it is Sabrina's 17th birthday.  Aunt Zelda and Aunt Hilda and Cousin Ambrose are throwing a party for their birthday girl, and of course, her cat, Salem, is present.  However, there is a party crasher, Amber Nightstone, who is also celebrating a seventeenth birthday.

Like Sabrina, Amber is also half-mortal and half-witch, and under the witch's “Code of Sorcery,” only one witch/mortal can achieve ultimate power.  And Amber wants to be the teen witch who gets to live in the mortal world.  So which of these female teen witches is going to have the best birthday?

THE LOWDOWN:  Sabrina Anniversary Spectacular #1 is an absolutely wonderful anniversary comic book special.  “Celebration Vexation” is one of writer-artist Dan Parent's best stories ever, and maybe he is the best modern Archie Comics storyteller.  Amber Nightstone, in this first look, seems to be a keeper as a character in the world of Sabrina, and I'm sure she can raise quite a bit of heck and hell in other Archie titles.

The four reprint stories include a one-page comic (“Sun Fun”), which finds Sabrina engaging a genie for some help, with painful results.  There is a “Little Sabrina” story (“Bats All, Folks”), which features Little Archie and Riverdale High regulars, Mr. Weatherbee and Miss Grundy.  Because of the new story, new character debut, and the quality of the reprinted stories, I highly recommend Sabrina Anniversary Spectacular #1.

I READS YOU RECOMMENDS:  Fans of classic-style Archie Comics and of Sabrina the Teenage Witch will definitely want to get a copy of Sabrina Anniversary Spectacular #1.