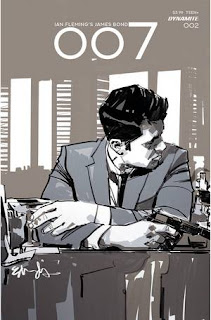 “Funeral for a Weapon”

Over the past 50+ years, Bond has made sporadic appearances in comic books, but Dynamite Entertainment has been steadily publishing James Bond comic books since early 2016.  Their latest James Bond comic book is James Bond: OO7.  It is written by Phillip Kennedy Johnson; drawn by Marco Finnegan; colored by Dearbhla Kelly; and lettered by Jeff Eckleberry.  The new series finds OO7 on a most personal mission to uncover the killers of a fellow OO agent and to unravel a conspiracy that threatens England and the balance of power in the world.

James Bond: OO7 #2 (“Funeral for a Weapon”) opens in OO7's memories and at the funeral of Gwendolyn “Gwen” Gann, a former Agent OO3.  But it turns out that she wasn't so former, this mentor and former lover of Bond's.  A meeting of OO agents doesn't really provide any answers to mystery of her murder.  But apparently Bond's boss, “M” does have some answers.

James Bond mourns a lost love even as he closes in on a clandestine organization whose agents would prefer that James die before he gets too close to their secrets.  What or who is Myrmidon?

THE LOWDOWN:  Since July 2021, Dynamite Entertainment's marketing department has been providing me with PDF review copies of some of their titles.  One of them is James Bond: OO7 #2, which is one of several Dynamite James Bond comic books I've read.

Writer Phillip Kennedy Johnson follows his humdinger of a first issue of James Bond: OO7 with a quieter, more secrets-revealing second issue.  Still, that doesn't make #2 any less exciting.  Bond is angry, but his opponents are relentless.  The result is exciting confrontations, with Johnson creating the atmosphere for even more confrontation.  Johnson gives us reason to come back for a third issue, and, dear readers, I plan to come back … for you, of course.

Posted by Leroy Douresseaux at 3:55 AM