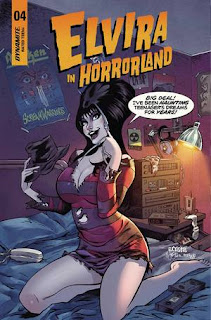 Chapter Four: “The Man of Your Dreams”

Elvira also appeared in comic books, beginning in 1986 with the short-lived series from DC Comics, Elvira's House of Mystery.  In 2018, Elvira returned to comic books via Dynamite Entertainment.  Elvira's latest comic book series is Elvira in Horrorland Volume 1.  The series is written by David Avallone; drawn by Silvia Califano; colored by Walter Pereyra; and lettered by Taylor Esposito.  The series finds Elvira trapped in the Multiverse of Movies (a bunch of “pocket dimensions” created by the existence of movies) with only the illusive “Remote Control of Federico Fellini” capable of returning her home.

Elvira in Horrorland Volume 1 #4 (“The Man of Your Dreams”) opens in a new world.  Elvira is still looking for the same old remote control.  Now, the Mistress of the Dark is taking on dream master, Teddy Luger, “the Man of Your Nightmares.”  As Elvira attempts to escape this nightmare – even the “New Nightmare – she will, however, find herself facing blame and more trouble.

THE LOWDOWN:  Since July 2021, Dynamite Entertainment's marketing department has been providing me with PDF review copies of some of their titles.  One of them is Elvira in Horrorland Volume 1 #4, one of many Dynamite/David Avallone Elvira comic books that I have read and enjoyed.

When I first saw Wes Craven's beloved horror film, A Nightmare on Elm Street (1984), I was scared outta my mind.  Over the decades, I have seen it many times, and while it scares me less, it is not by much less.  Thanks to several sequels and a reboot, Wes Craven's film and its signature monster, Freddy Krueger, are ripe for funnin' and poking.

Writer David Avallone is merciless, and artist Silvia Califano slaps the creepy atmosphere and spooky cinematography right out of the cinema of Elm Street.  Suddenly, a horror fave is merely an exercise of characters running around, waiting for something to happen to them.  It is somewhat painful to watch Avallone and Califano kick the stuffings out of the original and its follow-ups (some of which I really like).  If they were really mean, they could have gone into the … closet after one of the sequels.

So I say, keep having fun with Elvira in Horrorland.  Oh, and I like the wet dream joke.

Posted by Leroy Douresseaux at 4:08 AM