Comics Review: "GOOD ON BOTH SIDES" is Good Cover to Cover 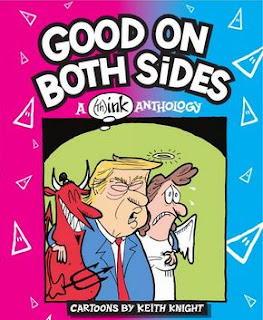 Good on Both Sides is a new collection of the socio-political, single-panel comic strip, (th)ink.  Debuting in 2000 on the now defunct website, Africana.com, (th)ink is the creation of Keith Knight, a cartoonist, comics creator, and musician.  Knight is also the creator and an executive producer on the recent Hulu series, “Woke.”  (th)ink currently appears in several outlets, including the Nib, Daily KOS, Antigravity, and The Funny Times.

Good on Both Sides, the fifth (th)ink paperback collection, takes its title by paraphrasing Donald Trump's moral equivalency after the 2017 “Unite the Right” rally in Charlottesville, Virginia.  It covers (th)ink episodes published during the early years of Donald Trump's masquerade as the 45th President of the United States.  Knight captures the absurdity of the time under an absurd leader and chronicles and depicts everything that made non-white supremacists cringe.

THE LOWDOWN:  In a sense political cartoonists are a dime a dozen.  The truth is that I have a hard time finding many that are really bad at their chosen professions.  What makes Keith Knight different?

I first became acquainted with Knight's work in late 2006 when I received a copy of Are We Feeling Safer Yet? (2007), the second (th)ink collection.  Sadly, I lost touch with him and had not thought of him until I heard about his Hulu TV series, “Woke,” last year.  I recently reconnected with him to request a copy-for-review of Good on Both Sides.  On the back cover of this book is a quote from Dawn Tol, part of which reads, “Keith Knight has never been more overtly Black.”

That is what makes Knight different from other political cartoonists.  He is Black.  Yes, there are other African-American political cartoonists (Walt Carr, David G. Brown), but for now, we are talking about Keith Knight, who is from a particular tradition.  That tradition involves Coloreds, Negroes, Afro-Americans, African-American, etc. who do not bite their tongues, metaphorically or otherwise, for the sake of propriety and for the feelings of good White folk and cautious, fretting Black folk.

I had forgotten just how screwed up the first half of Trump's occupation was … because the second half turned into … well,you know.  Knight's commentary via political cartoons is both incisive and relentless.  I won't say that he is “unapologetic” because apologizing is irrelevant in the context of what Knight does.  It isn't just Trump that is wrong with this country; it is also the rotten culture and society.  Honestly, much of that rot comes from White racism, supremacy, and privilege:  those that perpetuate it; those that enjoy the advantages while letting someone else do the dirty work; and those who benefit and give nominal lip service in criticizing it.

In Good on Both Sides, nothing and no one is spared.  Warts and all, Klan robes and hoods:  Knight reveals the stains without a thought for decorum.  Political commentary, words, pictures, or cartoons need that, especially when so many commentators want us to “turn down the temperature.”  Knight is the triple truth, Ruth.

Good on Both Sides isn't all about Trump.  As I said, there were plenty of awful people during that time who deserve Knight's punches.  Knight also offers several nice memorials and tributes to such luminaries as W.E.B. Du Bois, Dick Gregory, and Josephine Baker, to name a few.  I am not crazy about everything in Good on Both Sides, but it's close.  I could have read another hundred pages just to see what Knight has to say about the time period this collection covers.

Keith Knight's political cartoons are timely, and many are timeless.  The timeless ones will always have bite, but the timely will cut like a knife for years to come.  And Good on Both Sides is just plain funny.  I laughed a lot, and I practically always need that from political cartoons.  I encourage you, dear readers, to get a copy of Good on Both Sides.  Maybe if enough of you read it, someone will get the notion to shortlist Mr. Knight for a Pulitzer Prize.

I READS YOU RECOMMENDS:  Fans of great political cartoons and of Keith Knight's work will want to read Good on Both Sides.


You can buy copies of Good on Both Sides at indie book stores or at the following online shops: here or https://keithknight.bigcartel.com/product/pre-order-good-on-both-sides-the-new-th-ink-collection and here or https://microcosmpublishing.com/catalog/books/1446.

Posted by Leroy Douresseaux at 3:24 PM