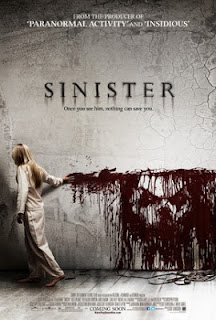 Sinister is a 2012 supernatural horror film and mystery thriller from director Scott Derrickson. Starring Ethan Hawke, the film focuses on a true-crime writer who finds a cache of 8mm "snuff" films in his new home and then begins an investigation of what seems like the work of a serial killer.

Ellison Oswalt (Ethan Hawke) is a washed up true-crime novelist whose last hit was a decade ago, a controversial book called Kentucky Blood. He is desperate to find a murder case that he can turn into another hit true-crime novel. Ellison moves his family into a Pennsylvania house where the previous family was found murdered. Four of the family members were hanging from a tree, while a fifth member, a daughter, was missing.

Oddly, Ellison does not tell his wife, Tracy (Juliet Rylance), about the house’s terrible history, and the family never really settles into their new home. Their son, Trevor (Michael Hall D’Addario), starts having the worst night terrors he’s ever had, and their daughter, Ashley (Clare Foley), is painting bizarre pictures on the walls.

Ellison finds a box containing some reels of Super 8 film and a projector. This discovery leads him to begin researching a serial killer whose career dates back to the 1960s. As Ellison tries to solve this mystery, a sinister force threatens him and his family.

Watching Sinister, I was reminded of how important sound effects and music are to horror films, thrillers, and other scary movies. There are indeed some creepy visuals and ideas in Sinister, but sound is what makes this movie really work the scares. Creaking noises in the house, footsteps in the night, gusts of wind, and everything that seems determined to go bump in the night, especially when someone is alone. The excellent sound effects in this movie had me watching the film in what was almost like a fetal position. And the music: it won’t make you shake your ass, but it’ll have you quaking in your boots.

I don’t want to spoil too much for potential viewers, but I must complain about the villain. He was less supernatural disturbing and more low-rent death metal scary. Sinister’s ending is a bit of a letdown, compared to the sheer frightener that the rest of this flick is.

Ethan Hawke carries this movie because the story is largely centered on Ellison Oswalt (a moniker that apparently blends the names of writer Harlan Ellison and actor/comedian Patton Oswalt). It’s a good performance with depth. Horror movie require that the viewer suspend disbelief, but this film explains why someone would do stupid things when faced with the supernatural. Ellison Oswalt is obsessed with writing a book, and his obsession makes his already self-centered nature even worse, to the point that he makes nothing but bad decisions. Hawke’s performance conveys this.

I did also like James Ransone as the sadly under-utilized character, Detective So-and-So. Once again, I want to do something I generally avoid. I want to heartily recommend Sinister. Even with its ending, it’s one of the best horror movies of the year 2012.