"The Wizard of Oz" Still the Greatest Fantasy Film Ever 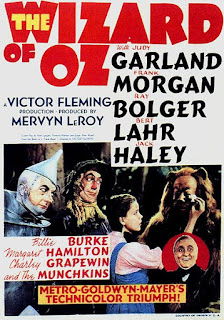 The subject of this movie review is The Wizard of Oz, a 1939 musical fantasy and adventure film from MGM (Metro-Goldwyn-Mayer). The film is based on The Wonderful Wizard of Oz, a children’s fantasy novel written by L. Frank Baum and first published in 1900.

Although Victor Fleming was credited as the film’s director, several other directors worked on the film, including King Vidor, George Cuko, and Mervyn LeRoy (who produced the film along with Arthur Freed). In fact numerous people who contributed to this film did not receive any screed credit, such as Arthur Freed (writer and producer), Ogden Nash (writer) and Herman J. Mankeiwicz (writer).

Various critics and popular polls often name it one of the “ten best movies of all time,” and in 2010, the Library of Congress said it was the most watched movie of all time. I’ve lost track of how many times I’ve watched it, but I consider The Wizard of Oz to be the greatest fantasy film of all time.

Since it was first released over six decades ago, The Wizard of Oz has stood the test of time as a great fantasy film. And though computers have revolutionized the use of special effects in movies, The Wizard of Oz, with its painted backdrops, handmade costumes, and ordinary makeup effects is as potent as any modern fantasy film filled with super SFX.

In the story, a tornado whisks a Kansas farm girl named Dorothy (Judy Garland) and her dog Toto to the magical Land of Oz where she encounters many strange and wonderful beings. She embarks upon a quest to the Emerald City to see the Wizard of Oz, who reportedly has it in his powers to send Dorothy back to Kansas. Along the way she gathers a group of fellow travelers who also wish a boon from the Wizard: The Scarecrow (Ray Bolger) who wants a brain; The Tin Man (Jack Haley) who wants a heart; and The Cowardly Lion (Bert Lahr) who wants courage. To get what they want, however, they must face off with The Wicked Witch of the West (Margaret Hamilton) who wants a pair of magical ruby slippers that Dorothy wears.

Anyone who has seen The Wizard of Oz is already aware of the magical hold the film has had and continues to have over audiences. Like a good fantasy film, it is filled with fantastical elements, but the heart of the story is the quest for something dear. For Dorothy, it is a way home; for her friends it is something they wrongly believe is missing from their lives and personalities. Like a great family film, The Wizard of Oz endears itself by entertaining all ages with a wonderful story, memorable songs and lines, and loveable characters. It is also in a way an adventure film, but the vicarious thrill of the adventure doesn’t come from destruction, but comes from sharing the quest with friends and loved ones.

The Wizard of Oz is undoubtedly one of the great American films. Watch it, and one can’t help but marvel how the filmmakers came together to make a film that approaches perfection with nearly every scene and in nearly every moment.