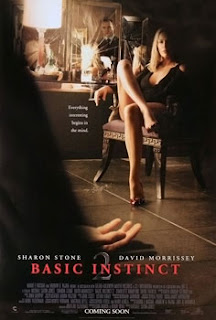 Charged with the murder of her fiancé, Kevin Franks (Stan Collymore), best-selling novelist, Catherine Tramell (Sharon Stone), is once again in trouble with the law – this time in London. Catherine faces questioning from Dr. Michael Glass (David Morrissey), a Scotland Yard-appointed criminal psychiatrist. Before long, more people are turning up dead all around Catherine, just as it did a decade and a half ago in San Francisco. The suspects are plenty, and the players include a conniving reporter and a dirty cop, as well as many of Glass’ friends and associates. An old case of Glass’ also comes into play. Did he know that George Cheslav (unseen in the film), a psychotic patient of his, was going to kill his girlfriend? Tramell sees the case as a chance to manipulate Glass as fodder for her new novel – about a psychiatrist who may or may not have committed murder. Glass has the training to withstand Catherine’s mind games, or does he? Can he even match her willpower? And what happens when the evidence from the murders start pointing to him as much as it does to Catherine?

Basic Instinct 2 isn’t good, nor is it really bad. It starts off with a bang, but most of it is dry, dull, and awkward, in spite of a good moment here and there and a killer ending that leaves the viewer asking questions just as the first film did. One wonders why we really needed a sequel to the San Francisco-based neo-noir, Basic Instinct, although there has been talk of one ever since the film became a blockbuster hit in 1992. Leora Barish and Henry Bean’s script is a good murder mystery, but it’s wrong for the Catherine Tramell character. Tramell certainly belongs in a lurid murder mystery; this just isn’t the one. Putting her in this British-based tale of deception and hard sex is like putting Shrek in The Lord of the Rings just because the former is a fantasy-based character and the latter is an epic fantasy.

Director Michael Canton-Jones (Scandal) tries to give this film some style, and judging from the explicit “love scenes,” he knows how to direct a hot sex scene. Sharon Stone still is Catherine Tramell, but she’s trying to hard, and Canton swoops in on her every wicked facial expression. For fans of the original, this is merely a curiosity piece and one that tries the patience.