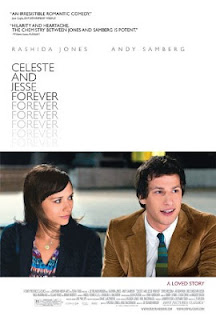 Celeste & Jesse Forever is a 2012 comedy-drama and romance film, starring Rashida Jones and Andy Samberg. Jones co-wrote the screenplay with Will McCormack, who also has a small acting role in the film. Jones and Samberg play a divorcing couple trying to maintain friendship while both pursuing relationships with other people.

Celeste Martin (Rashida Jones) and Jesse Abrams (Andy Samberg) were best friends and high school sweethearts. Now, they are a married couple, separated and headed for divorce. They remain best friends, but their new status irritates their friends, especially Tucker (Eric Christian Olsen) and Beth (Ari Graynor), who think that Celeste and Jesse are being weird. When Jesse gets some shocking news from a former acquaintance, Celeste starts having serious doubts about what her relationship with Jesse should be.

Celeste & Jesse Forever is more a romantic drama than it is a romantic comedy. It is also a straight character drama, as introspective as it is surprisingly funny. Celeste & Jesse Forever is one of the best (if not the best) romance films of 2012, and it has a number of high qualities. The performances are good, and the directing is lively and captures the film’s off-beat sensibilities. The cinematography seems vaguely futuristic, and the soundtrack is filled with songs that are either perfect for the moment or are delightful in the way that they are inappropriate for a scene.

The film’s strength is its screenplay. Rashida Jones and Will McCormack earned a 2013 Independent Spirit Award nomination for “Best First Screenplay” and a best screenplay nomination from the 2013 Black Reel Awards. Jones and McCormack tread on familiar ground with this story, but twist and contort it in interesting ways. Every time I thought that this movie was looking too much like a cookie-cutter romance, the story struck an odd note or peculiar pose.

And Rashida Jones flows through this film with her lovely performance. If you write an interesting part for yourself, the smart thing to do is turn in a performance that captures what is different and exciting about your screenplay, and Jones does just that. Andy Samberg is good, but this story does not require him to be adventurous as an actor. There are also a number of good supporting performances. Will McCormack is funny as the odd weed dealer, Skillz, and Emma Roberts is a delightful scene-stealer as pop music princess, Riley Banks.

Celeste & Jesse Forever is always turning on the charm, but this movie works because it manages both to feel real and to be uncommon and distinctive. It’s sweet and melancholy and pungent and joyous.

Posted by Leroy Douresseaux at 9:26 AM