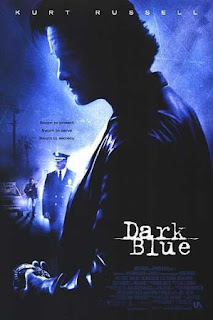 CRIME/DRAMA with elements of action and thriller

The subject of this movie review is Dark Blue, a 2002 crime drama from director Ron Shelton (Bull Durham) and writer David Ayer and based on an original story by James Ellroy. The film was released to theatres in February 2003.

Describing Ron Shelton’s Dark Blue is not an easy task. Even if I only dealt with the surface issues, I’d still have a hard time defining the film. What I can say is that it is brutal and unflinching in its display of violence, corruption, and human frailty. Shelton, who usually writes his own screenplays, has a devil of script in this one with which to work. James Ellroy, the mack daddy of American crime fiction and the novelist of L.A. Confidential, wrote the story and David Ayer, the writer of Training Day and The Fast and the Furious, wrote the script; thus, the pedigree of the story is one of immense power and frank honesty when dealing with the Los Angeles on a street level and in its darkest corners.

Set in the Los Angeles Police Department (LAPD) on the eve of the 1992 riots after the “Rodney King Beating Trial” verdict, the film focuses on a hardnosed cop with a penchant for shooting suspects, Sgt. Eldon Perry, Jr. (Kurt Russell) and his youthful partner Bobby Keough (Scott Speedman), whom Perry is training to follow in his tough footsteps. Perry is sometimes a kind of hit man and troubleshooter for his boss Jack Van Meter (Brendan Gleeson), who is also Bobby’s uncle. Van Meter’s web of deceit has drawn the attention of an ambitious deputy chief (Ving Rhames), who closes in on the corruption as the city awaits the verdict of King trial.

Dark Blue isn’t just about police corruption although that seems to be its central focus. The film has so much going on around the central character Perry that it’s hard to zero in on any particular issue. It’s about how people get drawn into the darker side of the law and remain there despite their misgivings. It’s about the ends justifying the means and about doing whatever you want to do or believe you have to do regardless of the cost to others.

More than anything, Dark Blue reveals how a select group of men treat the LAPD like their own personal boy’s club where they can live the most selfish and hedonistic lifestyle they want to live and the public pays the their club dues. Dark Blue makes it quite plain and matter of fact that quite a few cops look the other way when it comes to corruption and that some “officers of the law” are as bad or worse then the criminals they supposedly fight. Even the good guys are tainted. In fact, after seeing this, I have my doubts that bad cops actually only make up a very small percentage of police departments. Corruption is the cancer, but material gain is the alluring scent that draws them to the sickness. Of course, a lot of policemen look the other way because they know how easy it is to cross the line.

It takes a good cast to carry off a film like this, one that deals with difficult and angry subject matter in such a frank manner. Kurt Russell continues to affirm his status as a great male star in the tradition of the great tough guys, and he can act. I could read the drama in his face and see the character’s turmoil and conflict; Russell didn’t have to say a word. He only had to act. Scott Speedman plays the youthful and slowly corrupted Bobby with a charm that engages us to him especially when he’s trying to be a bad boy. Ving Rhames and Brendan Gleeson are fine character actors; they always bring something of themselves, their own personal style, to their characters, which gives those characters flavor.

Dark Blue may be an L.A. story, but its elements and themes are universal. The same issues that plagued the men and the bureaucracy of law enforcement in 1992 before the riots still bother them today. It’s good that Ellroy, Ayers, and Shelton can turn this disease into a big messy film full of ugliness, making us confront the mean streets and the even meaner men who play on it.

Dark Blue isn’t slick entertainment, and it does drag at times. Like Michael Mann’s Heat, it takes its time building up steam before it blows up in our faces. Good. Some things about “the law” need to gut punch America if the country’s going to pay attention. Shelton builds the tension slowly, but the audience needs the set up to get the payoff. If the ending seems confused, it’s the only appropriate one for a movie so deeply involved in the drama of life. I like having an important movie be this rough, crime drama (heck, I just like a good crime drama) that craps on the gloss of Hollywood. The art of drama doesn’t have to be pretty.