Review: "End of Watch" a Blast to Watch 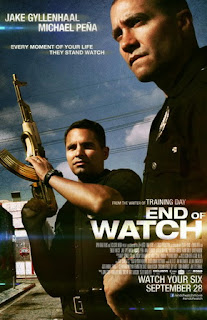 End of Watch is a 2012 thriller and cop movie from writer/director, David Ayer. End of Watch looks like a documentary, but is entirely fictional. The film stars Jake Gyllenhaal and Michael Peña as two young Los Angeles police officers who run into criminal activity that is bigger than they can handle.

Brian Taylor (Jake Gyllenhaal) and Mike Zavala (Michael Peña) are close friends and partners in the Los Angeles Police Department (LAPD). They are assigned to Newton, an area in South Central Los Angeles that is one of the toughest divisions in the LAPD. Both young officers, who are in their late 20s, have active personal lives. Brian meets and falls in love with Janet (Anna Kendrick), and Mike and his wife, Gabby (Natalie Martinez), are expecting a child.

Investigating gang activity in Newton, Brian and Mike uncover something so big that it also involves federal authorities. The actions of the young policemen draw the attention of the Curbside Gang, a vicious Latino street gang, and other criminal forces that are bigger than Brian and Mike realize.

Writer/director David Ayers is known for writing such police and crime films as The Fast and the Furious (2001), Training Day (2001), and Dark Blue (2004). Shot documentary-style, End of Watch is gritty and immediate, while films like The Fast and the Furious and Training Day are stylish, neo-Noir crime movies. In fact, End of Watch is at its best when it’s being gritty and in the middle of some kind of police action. Car chases, foot chases, shoot-outs, domicile entries, traffic stops, and stakeouts: they are riveting and nerve-wracking. Ayer’s collaborators give him some of the best cinematography and film editing of 2012.

When it focuses on the daily grind of police life or the ordinary moments of civilian life, End of Watch grinds to a halt. It’s as if the hum-drum of life is much less interesting to the filmmakers. It’s not that I have to have constant titillation; the movie simply loses its way when it’s not doing the exciting cop stuff.

The cast gives its all, however, even when they’re not chasing perps and popping caps. While Jake Gyllenhaal gives a good performance, of the two lead actors, Michael Peña gives the better performance. He earned a “Best Supporting Male” nomination at the 2013 Film Independent Spirit Awards (which was won by Matthew McConaughey for Magic Mike). Gyllenhaal tries so hard, but he looks like he’s acting. Peña is subtle, effortless, and natural, so that Mike Zavala seems like both a real person and a genuine police officer.