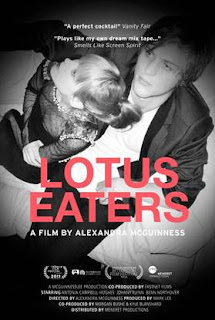 WRITTEN AND DIRECTED By Alexandra McGuinness

SYNOPSIS:
LOTUS EATERS features a cast of young up-and-comers lead by Antonia Campbell-Hughes, a former fashion model; Johnny Flynn, lead singer of the popular English folk-rock band Johnny Flynn & The Sussex Wit and Benn Northover, who appeared in a number of acclaimed films including Kidnapped Abroad and Harry Potter and the Deathly Hollows.

The film, the directorial debut of Alexandra McGuinness, follows a group of young Londoners as they struggle to find meaning in their lives while masking their discontent with sex, drugs, and rock ‘n roll. The story centers on ex-model and aspiring actress Alice (Antonia Campbell-Hughes) as she struggles with her relationship with Charlie (Johnny Flynn), her drug-addicted ex-boyfriend. The fashionable group of friends epitomizes a new modern “lost generation” reminiscent of Ernest Hemingway and his cohorts