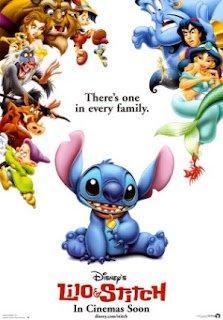 The subject of this movie review is Lilo & Stitch, a 2002 animated science fiction and family film from Walt Disney Feature Animation. This hand-drawn (or 2D) animated film is the 42nd film in the Walt Disney Animated Classics series.

With the release of Mulan in 1998, Walt Disney’s animated films soared to new heights of artistry, and the craft of their storytelling also greatly improved. With that film, not only were Disney films glorious eye candy, their stories were also quite moving, dealing with such universal themes as loss, redemption, acceptance, and triumph.

In Lilo & Stitch, we leave behind the China of Mulan, the virgin jungle of Tarzan, and the sensational underground world of Atlantis, The Lost Empire to travel the interstellar space ways and lush landscapes of Hawaii. It’s a fantastic ride of eye-popping visuals that capture the imagination and create the perfect backdrop to tell this story of two loners and outcasts who find companionship in one another.

Genetic Experiment 626 (voice of Chris Sanders) is the most dangerous weapon in the galaxy, created by Dr. Jumba (voice of David Ogden Stiers) for the sole purpose of destroying civilizations. Marked for destruction by the United Galactic Federation, 626 makes his escape to earth. After a series of mishaps on this planet, 626 lands at a dog pound where a friendless little girl named Lilo (voice of Daveigh Chase) adopts him as a pet and names him Stitch. After their parents died, Lilo’s sister Nani (voice of Tia Carrere) took on the task of rearing her sister. She isn’t having much success, and Stitch’s arrival has complicated matters. Mr. Cobra Bubbles (voice of Ving Rhames), a strict social worker who cuts an imposing figure, also applies serious pressure on Nani to do a better job taking care of her small sister or risk losing her. With his creator on the trail to capture him and pressure on her sister to take better care of her, Stitch and Lilo have to bridge the gap of worlds and become the only friends each other has.

Like most Disney animated films, the fact that Lilo and Stitch is entertaining is a given. What makes it stand out is the story’s touching drama and the animation’s colorful bounty. Co-writers/co-directors Dean DeBlois and Chris Sanders created a story with much dramatic impact. I really felt Lilo’s loneliness and her desire to fit in with other children and Nani’s desperation to hold what was left of her family together. DeBlois and Sanders really work the audience because they didn’t make it easy for the characters to obtain their hearts’ desires, so we have to really pull for them. Nani keeps dropping the ball, and Lilo is a handful to rear, to say nothing of the fact that Stitch is not much of a pet and is hard to train. Each character’s needs keep getting in the way of what other characters need. All this struggle makes the pay off at the end all the more rewarding.

As for the animation – what more can I say about Disney’s work? The sci-fi element of this film is quite strong, and several scenes takes place in sci-fi settings, many of which feature complicated chase sequences involving masses of star ships. Computers provide the animation for the tech stuff, but the computer animation looks, for the most part, like traditional cel animation.

Lilo and Stitch is also a throwback in the use of the watercolor backgrounds. Combined with the character animation, Lilo looks as if it were made at the height of the golden age of animation. The blend of traditional and modern was so seamless that it amazed me. With Atlantis, it was clear that Disney animators can create battle and chase sequences that rival those in the best live action movies, and the chase at the end of Lilo affirms that.

Lilo & Stitch will certainly please the target audience for which Disney aims it, but I think everyone likes Disney animated features when they give them a chance. Lilo doesn’t have smart aleck gags to keep adults awake while they suffer through this film for the sake of a children. In fact, what adult would suffer from watching this film? It’s one of those movies with a story that reaches out to everyone. And it’s filled with Elvis Presley songs. Who can resist that?

Posted by Leroy Douresseaux at 6:51 AM