Review: "The Wild Thornberrys Movie" More Than a Spin-Off 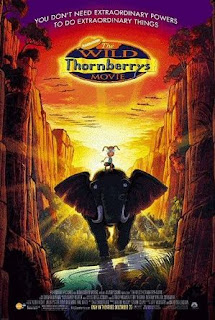 The film's winning story finds The Thornberry clan on safari doing what they usually do. Nigel (Tim Curry), the father, hosts a nature show, and Marianne (Jodi Carlisle), the mother, films it. Elder daughter, Debbi (Danielle Harris), is annoyed to be in Africa instead of back in civilization. Adopted wild boy, Donnie (Flea), is doing his wild boy thing.

Eliza (Lacey Chabert), ostensibly the lead character, explores nature with Darwin (Tom Kane), her chimpanzee best friend. You see, Lacey rescued a tribal shaman and he bestowed upon her the magical gift of being able to talk to animals. When a poacher snatches a cheetah cub, Eliza and Darwin launch a daring rescue mission that takes them from Africa to England and back to Africa, where Eliza discovers that the poaching of the cub was just the beginning of a larger conspiracy to massacre thousands of elephants for their tusks.

That many people looked at this film upon its release in 2002 as merely a film spin-off of a TV show is a shame. The Wild Thornberrys Movie is simply a great animated feature film, especially when compared to 9 out of 10 American-produced animated films released since 2002. Producers Klasky-Csupo, the two directors, the screenwriter, and the creative staff envisioned a mini-epic that spans two continents and takes the viewers through a multitude of environments.

The thrilling action starts in sprawling grassland of Africa and heads to a boarding school in the English countryside. The sprawl of central London leads to a subway ride, which becomes a plane ride. Then, a train ride back to the plains of Africa leads deep into the jungle and finally into a hidden valley for the showdown. It's a breathtaking action adventure that recalls Raiders of the Lost Ark and the older films that inspired Raiders.

The voice acting is good top to bottom (although Chabert, Kane, and Harris are personal favorites), and the soundtrack is a tasty gumbo of world music and cross-cultural jams. The inventive character design captures both the fun and imagination of cartoons. The animation (by Korean studio Sunwoo Entertainment) moves in a smooth, brisk manner, and the digital color emphasizes earth tones and golden hues that are pitch perfect with this film's story and message. The Wild Thornberrys Movie, a treat for young and the young at heart, is both a pastoral and a call to get in touch with the wild.

Posted by Leroy Douresseaux at 6:31 AM