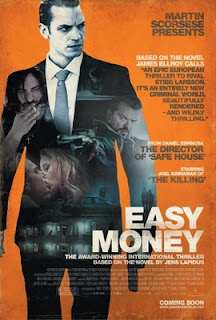 Snabba Cash is a 2010 Swedish crime thriller from director Daniel Espinosa. In 2012, it was released in the United States as Easy Money. The film is based on Snabba cash, a 2006 novel by Jens Lapidus, a Swedish author and criminal defense attorney. The film follows a poor college student who becomes involved with drug dealers in order to maintain his double life.

Johan “JW” Westlund (Joel Kinnaman) is a promising student at the Stockholm School of Economics, but he leads a double life. JW is a poor man pretending to be a rich man in the upper class areas of Stockholm. He illegally drives a taxi and does odd jobs for shady businessman, Abdulkarim (Mahmut Suvakci), in order to earn the money that helps him keep up the façade of his pretend lifestyle. After he meets wealthy heiress, Sophie (Lisa Henni), JW believes that he needs more money and is lured into Abdulkarim’s world of drug dealing and violence.

Jorge Salinas (Matias Padin Varela) is a fugitive from prison, on the run from both the police and Serbian mobsters. Jorge hopes to broker a massive drug deal with Abdulkarim that will allow him to leave a life of crime forever. Mrado (Dragomir Mrsic) is a hit man and errand boy for Radovan (Dejan Cukic), a Yugoslavian mafia boss based in Sweden. Radovan sends Mrado on a hunt for Jorge, but Mrado’s efforts are complicated by the unexpected arrival of his 8-year-old daughter, Lovisa (Lea Stojanov). JW’s life becomes entangled with Jorge and Mrado in a dramatic struggle for life and death.

The press material for Easy Money’s DVD release declares “Martin Scorsese’s Presents ‘Easy Money’.” I can see why Scorsese might admire Easy Money. Director Francis Ford Coppola created the epic film series, The Godfather, which detailed the drama of American mafia royalty. However, Scorsese’s epic crime dramas, like Goodfellas (1990) and Casino (1995), center on the mob’s middle-management and assorted street-level types, like capos, local bosses, hit men, enforcers, and armed robbers. In his bid to win the heart of a rich girl and enter the world of the well-to-do, JW follows the easy money breadcrumb trail to a Goodfellas-like life. This is a darker side of the lower-class, one that can be unfamiliar, even to one of JW’s working-class roots.

Like Scorsese’s crime films, Easy Money is a tale of complicated, messy relationships between men who are criminals. Some of these relationships are born out of long held associations; others come about when men unite because of necessity. That’s what makes this movie so brutally real – the character drama that focuses on the bonds of men, bonds that are convincingly authentic to the viewer.

Director Daniel Espinosa wowed people with his 2012 Denzel Washington-Ryan Reynolds international thriller, Safe House, by unveiling the complexities of both Washington and Ryan’s characters. In Easy Money, Espinosa has a lead character in JW, but he turns his film into something like an ensemble character drama with JW as an axis. Thus, Espinosa gets strong, leading man-type performances from the rest of the cast, especially Matias Padin Varela as Jorge and Dragomir Mrsic as Mrado, in addition to the intense turn from Joel Kinnaman, who does his fiercest hawk-like face for the camera.

One glaring weakness of Easy Money is the relationship between JW and Sophie, which doesn’t make sense. Where are the scenes that convince us that Sophie would be so crazy-in-love with JW? Yeah, it’s cool that Sophie is ultimately a down-ass chick, but it’s difficult to see in the film where, when, or why that happened.

Easy Money is not an art house foreign film. It plays like the best of the big boys of American crime films. This isn’t a slick tale about cool anti-heroes and murderous hoods, like The Fast and the Furious. Easy Money follows in the footsteps of Scorsese and even Quentin Tarantino. The language barrier can’t stop the easy-to-like and hard-to-resist Easy Money from entertaining crime film fans the world over.

Posted by Leroy Douresseaux at 8:16 AM