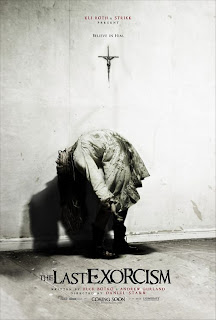 The Last Exorcism is a 2010 supernatural horror film. It is also a found footage film, a movie that pretends that it is made of film or video that was found somewhere. That film or video is a recording of real events that happened sometime in the past – usually the recent past. The best known examples of found footage films are The Blair Witch Project and the Paranormal Activity franchise. The Last Exorcism follows a troubled evangelical minister and the documentary crew filming his last exorcism.

The Reverend Cotton Marcus (Patrick Fabian) is a Baton Rouge, Louisiana-based evangelical minister. Years earlier, he and his wife, Shanna (Shanna Forrestall), went through the difficult birth of their son, Justin (Justin Shafer), and Cotton had a crisis of faith. After he learns of an autistic child being killed during an exorcism, Cotton begins performing fake exorcisms on people who claim to be possessed, but are probably suffering from some mental or psychological disorder.

As the film begins, Cotton decides to retire and want to perform his last exorcism. He agrees to let director/producer Iris Reisen (Iris Bahr) and cameraman Daniel Moskowitz (Adam Grimes) film his final exorcism as a documentary to help expose exorcism as a fraud. At random, Cotton chooses an exorcism request sent by farmer Louis Sweetzer (Louis Herthum), who claims that his 16-year-old daughter, Nell (Ashley Bell), is slaughtering his farm animals while she is possessed.

Cotton, Iris, and Daniel travel to the Sweetzer farm in Ivanwood, Louisiana, where they meet Louis and his hostile son, Caleb (Caleb Landry Jones). After meeting Nell, Cotton begins his fake exorcism routine with all the bells and whistles, but things turn really strange from there.

The Last Exorcism is like a cross between a horror movie and a reality television series, with the goofiness and inadvertent comedy of reality TV sometimes taking over the movie. There are moments when The Last Exorcism seems as if it is going to end up being an earnest movie crippled by its low-budget and by worn-out exorcism film clichés.

Then, the last half hour kicks in, and things get real fk-up. That’s when the party starts and we have us a horror movie. That’s it. That’s The Last Exorcism in a nutshell.

The acting from the leads is quite good. Ashley Bell’s mostly calm turn as Nell makes the moments when her character becomes possessed that much scarier, and Bell apparently did her own body contortions. Although it takes the entire movie, Patrick Fabian eventually sells Cotton Marcus as an authentic character.

As Louis Sweetzer, Louis Herthum gives an award-worthy performance. He reveals Louis’ troubled nature (which includes alcoholism), lingering grief over his wife’s death, and his stubborn religious fundamentalism in layers, one over the other. This is a performance that is both passionate and subtle. Somewhere, from some film group, there should have been at least a best supporting actor nomination for Herthum. In some ways, he gives The Last Exorcism gravitas.