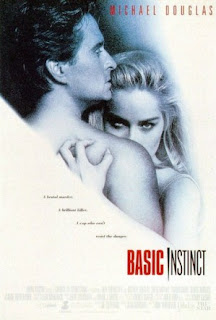 Nick Curran (Michael Douglas) is a tough, but vulnerable San Francisco detective – vulnerable because he’s under the watchful eye of Internal Affairs after he’d shot and killed some tourists during a pursuit of suspects. Nick has also complicated his life by having intimate relations with the therapist, Dr. Beth Garner (Jeanne Tripplehorn), his bosses are making him see.

The story begins after a prominent community member is found bound and brutally murdered (stabbed with an ice pick) in his blood-soaked bed. Nick’s life and job get even more convoluted when he and his partner, Gus Moran (George Dzundza), are assigned to be the lead detectives in the case. The prime suspect is Catherine Tramell (Sharon Stone), a cold, calculating, and beautiful novelist with an insatiable sexual appetite. Catherine takes an immediate interest in Nick and delves into his past, but is she using him for reference in her new novel or is she dragging Nick into an even more dangerous game. As the bodies pile up, Nick wonders if a jealous rival of Catherine’s or of his and Catherine’s relationship is out to frame her… and kill him. Or is Catherine behind all the murders?

Basic Instinct was one of the most talked about and controversial movies of 1992. Protests from gay rights groups marred the film’s production shoot after the script was leaked and it was learn that all the murder suspects in the film were lesbian characters. When the film was finally released, Basic Instinct’s explicit sex, tawdry subject matter, and riveting crime plot made it one of the year’s biggest box office hits and the poster child for those who believed sex and violence in Hollywood films had finally crossed too many lines.

But the film was good… no, great. Hot sex, hot girls, beautiful locations in San Francisco and the surrounding area, swanky sets, multiple plausible murder suspects, and a cop nearly out of his mind chasing hot ass – Basic Instinct was and still is a thoroughly delightful adult thriller. Director Paul Verhoeven created a murder mystery in the tradition of films such as Out of the Past and Murder, My Sweet. If Basic Instinct weren’t a color film, it would be a modern Film-Noir classic.

There were good performances all around, and the best were Michael Douglas and Sharon Stone’s. The duo had great screen chemistry, and Ms. Stone played the part for all it was worth, making her a top-billed, highly paid actress for the next few years. Rarely had there been so much sexual tension, distrust, dishonesty, and brazenness between a screen couple that couldn’t stop “being” with one another, and Douglas coolly played the role on the way to solidifying his position as an A-list actor.

One element that was absolutely necessary in making Basic Instinct such a sexy thriller is the Oscar-nominated score (Best Music, Original Score) by the late Jerry Goldsmith (1929-2004). Haunting and alluring, it helps the film capture some of the screen magic of crime films from the golden age of Hollywood. Goldsmith also provided the right musical themes and rhythms to go with Michael and Sharon’s pummel-your-partner love scenes.

Posted by Leroy Douresseaux at 10:29 AM