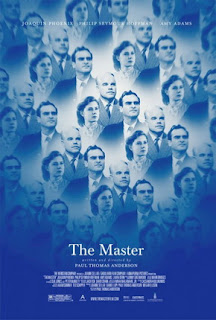 The Master is a 2012 film drama from writer/director Paul Thomas Anderson (There Will Be Blood). The film follows a World War II Naval veteran who returns to America unsettled and uncertain of his future – until he is tantalized by a new religion and its charismatic leader. The Master is also noted for its similarities to the life of L. Ron Hubbard, the founder of Scientology.

The Master opens with a brief look at Freddie Quell (Joaquin Phoenix) and his service during World War II. After the war, Freddie is sex-obsessed and an alcoholic, and he struggles to adjust to post-war life. Early in 1950, Freddie is jobless and drifting, when he stows away on the yacht of Lancaster Dodd (Philip Seymour Hoffman), the founder and leader of a philosophical movement called “The Cause.”

Seeing something in Freddie, Dodd takes him into the movement, and Freddie travels with Dodd along the East Coast, spreading the teachings of The Cause. Freddie’s erratic and violent behavior, however, makes Dodd’s followers, especially Dodd’s wife, Peggy (Amy Adams), suspicious of him.

First, let me say, The Master is a film overflowing with quality. The cinematography by Mihai Malaimare Jr. is some of the best that I’ve ever seen. The colors practically pulse with enchantment. Every so often, I come across a film score that affects me in ways that just seem to inspire me to better things. Jonny Greenwood, the lead guitarist and keyboardist of the rock band, Radiohead, delivers such a score for The Master.

Yada, yada, yada: do I have to say that Joaquin Phoenix, Philip Seymour Hoffman, and Amy Adams deliver stellar performances? Of course, they do; it’s some of the best work these three actors have ever done.

Anderson takes what he gets from his collaborators and delivers a vibrant, uncompromising film in The Master. It is a trip down the piss-gold, yellow brick road into the American heart of darkness, delving into themes of master-disciple relationships, the yearning for success, and our urge to uncover each other’s secrets. The Master is challenging and frustrating, but for serious movie audiences, it is simply a gift.

Greenwood’s score, which Anderson uses to maximum effect, makes me think that, in some ways, The Master is a science fiction film. As much as the film delves into the past, it is about where the characters are going – their futures. At times, The Master looks like a weird science fiction film made in the late 1940s or early 1950s. The Master seems out of time, a movie that belongs to a time over a half-century ago, and it was trying to predict what the psychological state of affairs would be like after “The Cause” took over the world.

Anderson refuses to settle the matters of the characters by the end of this film –sorry for that semi-spoiler. However, The Master is the kind of movie that proves that film is indeed an art form and not merely a commercial endeavor for people and corporations that want fame and money.

Posted by Leroy Douresseaux at 6:17 AM