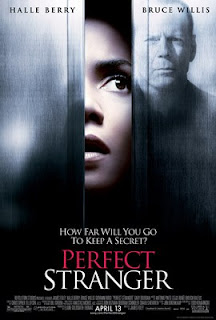 The subject of this movie review is Perfect Stranger, a 2007 psychological thriller from director James Foley. The film star Halle Berry and Bruce Willis, respectively, as an undercover journalist and a shady businessman in a cat-and-mouse game.

Playing the role of the abused woman of African-American descent has served Halle Berry quite well. In 2002, Berry won an Oscar for playing just such a character in the film, Monster’s Ball. She portrays another put upon woman or sufferin’ sistah type in the film, Perfect Stranger, with Bruce Willis playing the apparent central bully. But this time, Berry’s loyal audience is the victim of a truly bad movie.

After her friend, Grace Clayton (Nicki Aycox) is found murdered, investigative reporter Rowena “Ro” Price (Halle Berry) is determined to find the murderer. She believes that Grace’s death is connected to a powerful advertising executive, Harrison Hill (Bruce Willis), who seduces women in the online dating world of chat rooms, although he is married. Rowena infiltrates Hill’s advertising agency, H2A, as a temp worker named Katherine Pogue, and she also secretly teases him online under the moniker, Veronica. With the help of newspaper colleague and friend, Miles Haley (Giovanni Ribisi), Rowena pries into all facets of Hill’s life. The closer she gets to the truth, the more Ro learns how far people will go to protect it, and she finds herself struggling to protect her own secrets.

Perfect Stranger is vile, vulgar, cheap, and tawdry in the way the director and writers portray sexual relationships and in the coarse manner in which characters speak to each other. What makes this film really bad, however, isn’t the sex, nudity, crude language, explicit violence or even the woefully bad acting. It’s that Perfect Stranger is a poorly conceived mystery thriller. Perhaps, the writers knew how the story would end, and they were clear about who the victims would be and when they would be victimized. Beyond that, this narrative is full of holes.

Even viewers who normally find both obvious and none-too-subtle clues flying over their heads (that includes me), will find themselves scratching their heads at how easily and early this story disintegrates. The central murder doesn’t make sense when one considers that the killer is supposed to be so clever. The subsequent police investigation would certainly break up this film’s story within the first half hour. Sure, we’re supposed to suspend disbelief in the movie theatre, but what about verisimilitude? Since Perfect Stranger is set in a world like ours, it should also work logically in the real world.

Without Halle Berry and Bruce Willis, who both gave poor, poor performances, Perfect Strangers would have been a direct-to-DVD film… that not many people would rent. Only my love for Berry prohibits me from giving this an “F.”

Posted by Leroy Douresseaux at 7:59 AM