Review: "Rise of the Guardians" Rises with Jack Frost 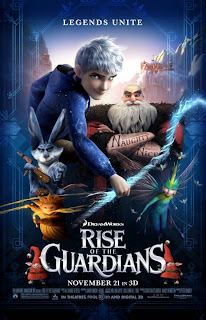 Rise of the Guardians is a 2012 3D computer-animated, fantasy film from DreamWorks Animation. The film is based on The Guardians of Childhood books series by William Joyce and is also inspired by Joyce’s animated short film, The Man in the Moon. Joyce and Guillermo del Toro are among the film’s executive producers. Rise of the Guardians is also the first big-budget, computer-animated (CG-animated) film to be directed by an African-American, Peter Ramsey.

Rise of the Guardians is apparently set 300 years after the book series. The movie focuses on a newcomer caught in a battle between immortals that protect the innocence of children and an evil spirit that launches an assault on Earth.

Pitch Black (Jude Law) is The Boogeyman, the essence of fear known as the Nightmare King. Pitch announces to the Guardians that he is going to destroy children’s faith in them as an act of revenge because children no longer believe in him. The Man in the Moon tells the Guardians to induct a new member, Jack Frost (Chris Pine), in time for their struggle with Pitch Black. Jack declines the offer, as he has spent centuries in isolation because children do not believe in him. However, as Pitch’s threat looms, Jack finds himself dragged into the conflict and forced to find himself and his place.

Rise of the Guardians reminds me of DreamWorks Animation’s 2010 surprise CG-animated hit, How to Train Your Dragon. Dragon had two great characters, the Viking teenager, Hiccup, and his partner, the Night Fury dragon, “Toothless.” When Dragon focuses on Hiccup and Toothless, the film soars, but everything else about the movie, from characters to plot, is inconsistent in quality.

Rise of the Guardians is similar in that aspect. Jack Frost is a truly spectacular animated character. The rest of the film, from characters to action, ranges from good to mediocre to tolerable. Pitch Black, the villain, is merely a jumped-up stage villain full of typical grudges and complaints, and Jude Law’s voice performance does little to lift the character. And what the hell was Alec Baldwin doing as Santa Claus? This film’s concept, plot, and screenplay are an exercise in ups-and-downs and hits and misses. Attempts to give the story heart and meaning sometimes seem contrived, and when the story does have depth, it occasionally comes across as sugary or even fake.

On the other hand, Jack Frost is a treasure. This is his movie and his story – the journey of a hero, and Jack’s internal dilemmas and outward struggles ring with authenticity. He is the star, and the other Guardians are his supporting cast. Chris Pine delivers his finest performance as actor… in a voiceover role, but he brings Jack Frost to life with verve and depth. Pine left me wanting more.

Director Peter Ramsey does a good job of making the action in Rise of the Guardians rise above the defects in plot and narrative. Rise of the Guardians moves like an action movie, but it is imbued with something classic Walt Disney animated films, like Cinderella and Snow White, have. That is the sense of a fantasy movie that is really like a fairy tale, filled with magic and enchantment. CG-animated films don’t really have that sense of the supernatural because, as art created largely by computers, they feel more like technological marvels, but Rise of the Guardians has that old animation magic.

It is both this sense of magic and the magical Jack Frost that help Rise of the Guardians rise high above its shortcomings.

Posted by Leroy Douresseaux at 8:58 AM